TOKYO - Japanese Prime Minister Shinzo Abe on Monday (March 19) said he accepted blame for an unravelling scandal in which official records were tampered with, but resisted opposition calls for him and Finance Minister Taro Aso to resign.

"The ultimate responsibility lies with me as the head of the administrative branch. I would like to apologise once again," Mr Abe told Parliament. "We take seriously the fact that this is a situation that has shaken public confidence in the entire administration."

Support ratings for his Cabinet have plunged below 40 per cent in four separate media polls at the weekend, but he said it is now his task to look into why the doctoring happened, and to win back public trust.

Last week, the Finance Ministry admitted that 14 documents related to a dubious sale of state land at one-seventh of the appraised value to nationalistic school operator Moritomo Gakuen had been altered. The educator intended to build a new elementary school, at which Mr Abe's wife Akie was to be named honorary principal.

The papers were scrubbed of all mention of Mr Abe and his wife, as well as lawmakers from the ruling Liberal Democratic Party (LDP). On Monday, it emerged that another set of documents, which shows a record of price negotiations with Moritomo before the sale, was missing from what was submitted to Parliament last week.

Mr Abe denied he was in any position to play a part in the forgeries, saying that he had no clue of the documents' existence to begin with.

He was responding to calls by the opposition that it was Mr Abe's pledge to resign, made in February last year, if either he or his wife was found to be directly involved in the sweetheart deal that sparked the entire chain of events.

He said: "I had no way to tell the Finance Bureau to alter the documents, which I did not know even existed." 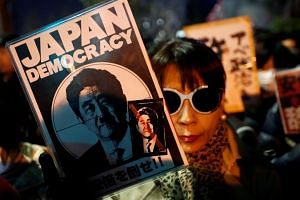 He also noted that it was "natural" that the public was sceptical, given that his wife was to take on a leadership role at the school. He said his wife will, from now on, "decline such honorary posts, with some exceptions".

The government has insisted that the hefty discount was necessary to decontaminate heavily-polluted land. But in reports quoting investigative sources last week, the contractor said it was pressured into faking a report on the depth of garbage found on the land, which was used to justify the low price.

The scandal has led to the high-profile resignation of National Tax Agency chief Nobuhisa Sagawa, who presided over the Financial Bureau at the time of the tampering, on March 9. The same day, it was reported that a bureau official committed suicide.

The LDP government has painted the case as one of sontaku, which refers to the surmising of wishes and acting on assumptions.

But with the perception that bureaucrats have been made to take the fall for the LDP, observers like Sophia University political scientist Koichi Nakano warned the situation could yet unravel further with even more leaks by civil servants unhappy with Mr Abe's government.

There is already talk that papers related to another cronyism scandal last year might have been altered.

Mr Abe has been accused of giving preferential treatment to Kake Gakuen, a school operator run by his close friend, to open a veterinary school.

Opposition lawmakers also pounced on the LDP on Monday for reports over the weekend that an anonymous LDP politician had pressured an education board in Nagoya for details on a lecture by the whistle-blower of the Kake Gakuen scandal.

The unravelling debacle - coupled with the plummeting support - may well jeopardise Mr Abe's chances at an upcoming LDP presidential election this autumn.

The 63-year-old is gunning for an unprecedented third consecutive term, which would put him on course towards becoming Japan's longest-serving leader.

However, two separate media polls by Kyodo News and Nippon TV over the weekend had Mr Abe knocked down to third place in the public's choice for prime minister.

Both men have been critical of Mr Abe's handling of the current crisis.