TOKYO (REUTERS) - Japanese Prime Minister Shinzo Abe, eager to resolve a row that has haunted ties with Moscow since World War Two, has told Russian President Vladimir Putin the United States would not put troops on disputed islands if they are handed over to Japan, a newspaper reported on Friday (Nov 16).

Seeking to cement his diplomatic legacy and improve ties with Russia to counter a rising China, Mr Abe has pledged to settle the dispute over four isles in the Western Pacific that were occupied by Soviet troops toward the end of the war.

They are known as the Northern Territories in Japan and the Southern Kuriles in Russia.

Any agreement involving transfer of sovereignty to Japan would have to address whether the US-Japan security treaty, the core of Japan's diplomacy, would apply, including whether Washington would have the right to put military bases on the islands.

The isles have strategic value for Russia, ensuring naval access to the western Pacific.

The two leaders agreed in talks in Singapore on Wednesday to speed up talks based on a 1956 joint declaration in which the Soviet Union agreed it would hand over two smaller islands after a peace treaty formally ending the war had been concluded. 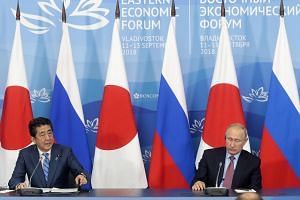 Japan has long insisted its sovereignty over all four islands must be confirmed before a peace treaty is signed.

In recent years, however, there have been signs Tokyo was rethinking its stance, perhaps with a "two-plus-alpha" formula that would focus on the handover of the two smaller isles and some sort of visa-free access to the larger islands, plus joint economic projects.

A breakthrough has been elusive. But Mr Abe, who is expected to meet Mr Putin again at a Group of 20 (G-20) summit in Buenos Aires from Nov 30 and in Russia early next year, has said he's determined to settle the dispute before leaving office in 2021.

Mr Putin may be less keen. Russian news agency Tass quoted him as saying after meeting Mr Abe in Singapore that talks based on the 1956 statement "certainly demands separate, additional and in depth analysis, given that not everything is clear in that Declaration".