TOKYO (AFP, REUTERS) - Japan's embattled Prime Minister hit back on Monday (March 19) at critics over a favouritism and cover-up scandal that has seen his popularity plunge and loosened his iron grip on power.

In a hotly awaited statement in parliament, Mr Shinzo Abe stressed he had not ordered bureaucrats to alter documents relating to a controversial land sale as he comes under mounting pressure over the scandal.

"I have never ordered changes," he said.

But he took responsibility for a loss of trust in his government.

The scandal surrounds the 2016 sale of state-owned land to a nationalist operator of schools who claims ties to Mr Abe and his wife Akie.

The sale was clinched at a price well below market value amid allegations that the high-level connections helped grease the deal.

The affair first emerged early last year (2017), but resurfaced after the revelation that official documents related to the sale had been changed.

The finance ministry’s announcement last week that documents about the discounted sale to educational body Moritomo Gakuen had been altered have sparked a political crisis for Mr Abe, as suspicions swirl about a cover-up and opposition parties call for both the premier and Finance Minister Taro Aso to resign.

Interrogated by a parliamentary panel on Monday, Mr Abe denied directing changes to the documents, in which references to Mr Abe, his wife and Mr Aso were removed from the Finance Ministry’s records of the land sale. He told the panel he had not even known of the documents’ existence.

“I did not direct that the documents be altered,” Mr Abe said. “In fact, I didn’t even know that they existed at all, so how could I have done that?” 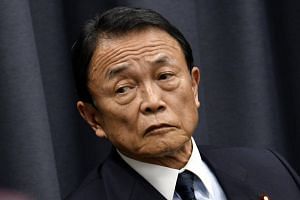 Mr Aso has blamed the alterations on "some staff members" at the ministry.

He insisted that, even before the alterations, the documents showed that his hands were clean.

The affair is hitting his ratings hard, with a new poll in the Asahi Shimbun showing public support nose-diving by 13 percentage points from the previous month to 31 per cent.

Another survey suggested that for the first time since before a general election in October, more people disapproved of the Cabinet's performance than approved.

On Monday, in an apparent nod to those polls, Mr Abe acknowledged that public trust had been shaken.

“As head of the government, I keenly feel my responsibility in the matter of the people losing their trust in the administration,” he said.

“Ultimately, the responsibility lies with me as prime minister. I would like to apologise once again.”

Opposition lawmakers said answers to their questions were unlikely to come from the premier or Mr Aso and renewed their call for Mr Nobuhisa Sagawa, who had headed the division that submitted the documents before he became tax agency chief in July, to testify in parliament.

A majority of people in the opinion polls also backed the calls for Mr Sagawa to testify, as well as Mrs Abe. But Mr Abe said on Monday that he would answer any questions on her behalf.

The scandal is harming Mr Abe's hopes of winning re-election as head of his Liberal Democratic Party (LDP) in September, which would make him Japan's longest-serving prime minister.

Going forward, the focus "is whether or not there is proof that Mr Abe or those near him directly ordered the alteration of the documents. If that comes out, the risk of Mr Abe’s resignation will rise", said senior market economist Naomi Muguruma at Mitsubishi UFJ Morgan Stanley Securities.

Mr Abe has fallen behind his main rival in a survey of who voters would like to see as prime minister.

According to a Nippon TV poll, 24 per cent thought former defence minister Shigeru Ishiba was “most appropriate”.

Mr Ishiba was followed by 21.2 per cent for Mr Shinjiro Koizumi, the telegenic son of former prime minister Junichiro Koizumi.

Mr Abe drew 14 per cent while the biggest percentage – 25 per cent – said they did not know.