TOKYO - Japan plans to have an aircraft carrier for the first time since World War II, a move that has raised eyebrows even though Tokyo insists it will not mark any shift from its pacifist defence posture.

The plan to modify at least one of its two Izumo-class helicopter destroyers such that it can launch a variant of the stealth F-35 fighter jet will be crystallised in new defence guidelines to be approved by the Cabinet next week, media reports have said.

Other plans reportedly in the guidelines, which will cover five years from April 2019, include the purchase of 105 F-35 jets from the United States to replace an ageing fleet of F-15s. , and the deployment of unmanned surveillance submarines as well as long-range and hypersonic missiles to defend its small islands, including the Okinawa chain.

The 105 jets will include 42 F-35B aircraft, which have short take-off and vertical landing capabilities and have not yet been deployed in Japan. Tokyo hopes the big-ticket purchase - which contributes to a record 27.5 trillion yen (S$333 billion) five-year defence budget - will go some ways in mollifying US President Donald Trump, who has pilloried Japan, a key security ally, for its huge trade surplus.

But much attention is being paid, however, to the proposed upgrades to the Izumo, as its newfound offensive capability will go well beyond that of self-defence and despite a pacifist Constitution, which Prime Minister Shinzo Abe has vowed to amend by 2020.

Japan's two Izumo-class vessels, named the Izumo and the Kaga, are its largest destroyers at 248m in length and 27,000 tonnes in weight. They are each now capable of carrying 14 helicopters though, when modified, will be able to carry the F-35B variant. 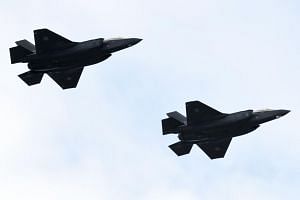 Kyodo News Agency, citing a passage from the guidelines, reported that the upgrade will "enable fighter jets to be operated from existing warships, if necessary, to improve the flexibility of their operation".

Dr Narushige Michishita of Japan's National Graduate Institute for Policy Studies told The Straits Times that the upgrade will be an important step, despite limits to how the Izumo can be modified that will in turn "limit the operational radius of any fighter aircraft".

Nonetheless, the modification will enable the Izumo to be a more all-rounded carrier that can "operate in a much more hostile environment than before, therefore enhancing its value as an anti-submarine warfare platform while building on its air defence capability", he added.

Kobe University security expert Tosh Minohara said that the upgrade will boost Japan's power projection. He said: "As the old adage goes, the best defence is a good offence, which in this case is the deterrence effect."

Earlier this week, Mr Abe told a panel of national security experts that given the drastically changing security environment, Japan needs "fundamentally to strengthen our preparedness to protect the people's lives, property, territorial waters and airspace on our own".

He added that Japan should look beyond the primitive division of ground, sea and air defence, and "carry out reforms at an unprecedented speed".

Defence Minister Takeshi Iwaya, separately, stressed that Japan will not label an upgraded Izumo as an "attack aircraft carrier", and that it will not pose any threat to other countries even if fighter jets were to be deployed.

The left-leaning Asahi Shimbun warned that the move marks a "clear break" from Japan's strictly defensive posture and could in turn trigger a "futile arms race in the region".

"By introducing an aircraft carrier, Japan could make itself look more enthusiastic about a military build-up than it actually is," it said.

China's Global Times newspaper slammed the plan, accusing Japan of resorting to the "China threat theory as an excuse to do what it wants".