TOKYO (REUTERS) - A male employee is suing sportswear maker Asics Corporation for alleged mistreatment after taking paternity leave, a case that has shone a spotlight on gender equality and workers' rights in Japan.

The lawsuit filed by a 38-year-old man - who says he was harassed by his employer after taking parental leave in 2015 and 2018 that is legally available to all workers but rarely used by men - is scheduled to begin in a Tokyo court on Thursday (Sept 12).

The man requested anonymity because of a Twitter backlash from users who accuse him of being selfish for taking a year of leave for each of his two children.

"I'd been thinking, I'm going to be a salaryman for something like 40 years, so what's a year or two of leave compared to that," he told Reuters in an interview.

Japan's parental leave policies are among the world's most generous, providing men and women partial-paid leave of up to a year, or more if there is no public childcare. Few men take it.

The case highlights the challenge of bolstering the role of women in the workplace, championed by Prime Minister Shinzo Abe's Womenomics programme, in a society where social norms discourage men from taking on child rearing or housework.

"There are plenty of people who want to take childcare leave, as it's their right, but they cannot because their workplace makes it difficult. Someone had to speak up," the Asics employee said.

The man says he was transferred to a warehouse operated by an Asics subsidiary after he returned from his first paternity leave.

It was not an official demotion or a pay cut, but the job involved carrying and unloading heavy boxes - a big change from his previous role in Asics' personnel department. 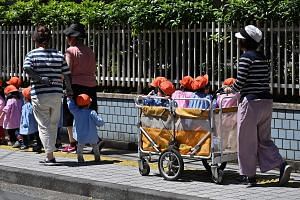 He hired a lawyer and complained to his bosses.

Asics allowed him to return to a desk job, but gave him what he said were meaningless tasks, such as translating company guidelines into English.

That situation has continued since the end of his second parental leave earlier this year, he said.

Asics said it had tried unsuccessfully to negotiate with the worker's legal and union representatives, and "looks forward to making the truth clear" in court.

A Gold Partner sponsor for the Tokyo 2020 Olympics and Paralympics, the company bills itself as a socially progressive and inclusive company.

"We put effort into fostering diversity, and we will continue to make greater efforts to ensure our work environment and policies allow people to remain active through pregnancy, birth and childcare," Asics said in a statement to Reuters.

Glen Wood, a former equity sales manager at Mitsubishi UFJ Morgan Stanley in Tokyo, is suing the brokerage for harassment after he returned from paternity leave. The company has denied the allegations.

Chemical firm Kaneka Corporation was criticised in June after an employee's wife said on social media her husband was told to move from Tokyo to the company's Osaka office after taking a month of parental leave and denied his request for a postponement.

Kaneka has said the relocation was appropriate and not punishment for taking paternity leave. The worker has since quit.

Labour lawyer Yoshitatsu Imaizumi, who is representing Mr Wood, said such lawsuits are rare because few male workers feel they can take action.

"You could say we're seeing the tip of the iceberg in that there are many more people who want to take childcare leave, but feel they can't, or run into trouble when they try," he said.

Only 6 per cent of eligible fathers took childcare leave last year, and most of them took less than a week off, according to government data.

While the take-up is double the 3 per cent rate of a few years ago, it is far short of the 13 per cent target set by the government for 2020.

The government is struggling to meet other gender equality targets, such as women occupying a third of corporate and public sector leadership roles by next year.

Women currently hold just 4 per cent of corporate board seats, according to Tokyo Shoko Research.

Niki Harada, president of the Tokyo Youth Union which represents young workers, said men were beginning to grapple with some of the same issues faced by women for decades.

"As more men take part in rearing children, the disadvantages that women have been experiencing, around having children and taking childcare leave, are now being experienced by men," he said.