TOKYO (THE YOMIURI SHIMBUN/ASIA NEWS NETWORK) - The Defence Ministry has made a policy decision to develop the nation's first domestically manufactured air-to-ship long-range cruise missile, to be mounted on Air Self-Defence Force fighter jets and capable of attacking a warship from outside of an adversary's range.

The new missile, which is to be developed in response to the rapid advance in the strike capability of the Chinese Navy, will reinforce Japan's deterrence by extending the shooting range to more than 400km. The ministry aims to put the new missile into practical use within a few years, government sources said.

The Defence Ministry completed development of the supersonic air-to-ship ASM-3 missile in fiscal 2017. Mounted on an ASDF F-2 fighter jet, the missile is capable of flying at Mach 3, or about three times faster than the conventional, domestic anti-ship missiles.

The missile is considered least vulnerable to an adversary's interception because of its speed, but its range is believed to be only from about 100km up to about 200km.

The new missile is envisaged to have a range of over 4km by making improvements to such things as the fuel-load of ASM-3 missiles, with the improved capability of anti-air missiles mounted on Chinese warships in mind.

In the 2000s, China debuted a high-performance warship dubbed the "Chinese Aegis destroyer", which is mounted with missiles with an estimated range of about 150km. Between 2013 to 2018 alone, more than 15 such destroyers are said to have gone into commission, and the number is expected to rise further. 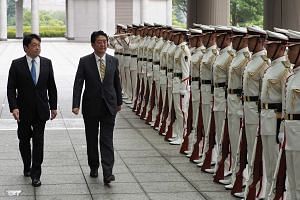 The ASM-3 missile, whose full-fledged development began in fiscal 2010, has a reduced range equivalent to that of Japan's existing missiles because of "a political consideration that (a missile with a greater range) could be perceived as one capable of striking enemy bases", a senior Defence Ministry official has said.

However, in order to effectively counter a missile strike launched by the Chinese Navy, a missile with double the range of the ASM-3 is considered necessary.

The short range of the ASM-3, whose development has been completed, has been questioned even within the Defence Ministry, so the ministry did not include procurement of the missiles in its draft budgets for fiscal 2018 and 2019. The ministry is considering incorporating the spending on the new missile development in its budget for fiscal 2020, at the earliest.