TOKYO – Japan’s Crown Prince Naruhito, who turns 59 on Saturday (Feb 23), has promised to build on his parents’ legacy by being close to the people when he becomes Emperor on May 1.

His father Emperor Akihito, 85, and his mother Empress Michiko, 84, have actively sought to bridge the distance between the monarchy and the commoner since assuming their roles in 1989.

In doing so, the Emperor has defined the role as “the symbol of the state and of the unity of the people” as stated in Japan’s post-war Constitution. The soft power icon has also expressed remorse over the war that was waged under the name of his father, Emperor Hirohito.

Crown Prince Naruhito told a press conference on Thursday (Feb 21) that he holds in solemn regard his role as Emperor. “I want to earnestly fulfil my duties by always being close to the people, and sharing with them their joys and sorrows.”

While a segment of right-wing conservatives continue to see the Emperor as a demi-god and frown upon efforts to build ties with the public, the Crown Prince said he hopes for more chances to listen to the voices and concerns of Japanese around the country.

Emperor Akihito is set to step down from the Chrysanthemum Throne on April 30 in the first abdication in 200 years.
This will mark the end of the Heisei (achieving peace) era, with the new era name set to be announced on April 1, a month before Naruhito becomes the 126th monarch in a semi-mythical unbroken hereditary lineage that dates back to 660BC.

On Friday (Feb 22), Japanese Prime Minister Shinzo Abe and Crown Prince Naruhito discussed domestic and foreign affairs in a rare meeting, given the upcoming ascension to the throne.

US President Donald Trump is set to be the first world leader to get an audience with the new Emperor during a state visit planned for May 26. Some 2,600 guests, including foreign dignitaries, will attend the official coronation ceremony scheduled for Oct 22.

Crown Prince Naruhito, whose name comprises words that mean “benevolent” and “virtuous” in Japanese, said he sees building international goodwill as one of his most important imperial duties. 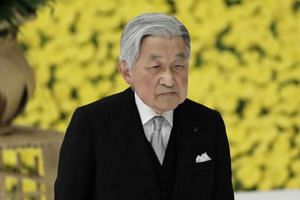 Japan's transition to new era should be smooth: Yomiuri Shimbun

The emperor-in-waiting, who graduated with a history degree from Tokyo’s Gakushuin University and has a doctorate in civil law from Oxford, said he wants to continue to update the imperial throne while upholding tradition as “a new wind blows with the new era”.

Princesses lose their royal status when they marry commoners and are barred from ascending the throne. There will only be three heirs when Prince Naruhito becomes Emperor: his younger brother, Prince Akishino, 53; his nephew, Prince Hisahito, 12; and his uncle, Prince Hitachi, 83.

Masako, a former top diplomat, has been suffering from a stress-related disorder that was said to be induced by stifling restrictions that were imposed by the traditional household. But the Crown Prince, in seeking the public’s understanding, noted that she has gradually been taking on more duties.

“She won’t be able to do everything overnight even as the volume of her official duties increases with the change in her status,” he said. “But with the warm well-wishes of the public and while watching her health, she is continuing her efforts to get better."