OTSU, JAPAN - A court in Japan has ordered two former classmates of a boy who committed suicide to pay damages of about 37 million yen (S$450,000), acknowledging that their bullying led to his death, local media reported.

The focus of the trial at the Otsu District Court in Shiga Prefecture was whether the two classmates had bullied the 13-year-old boy, and if there was a causal link between the bullying and his death in 2011, Japan Today reported.

"The main cause of the boy's suicide were the acts against him by the former classmates," presiding Judge Shigeyasu Nishioka said on Tuesday (Feb 19) in handing down the ruling in the high-profile bullying case.

The boy took his own life on the morning of Oct 11, 2011, by jumping off the condominium where he lived. He was in his second year at a junior high school in Otsu city.

According to Japan Times, the boy's parents in 2012 filed a damages suit against three former classmates and their guardians, seeking a total of about 38 million yen. The bereaved parents also sued the Otsu Municipal Government for damages.

The court rejected the plaintiffs' demand for damages from a third classmate. It cannot be said that the other classmate had participated in the bullying in an integral manner alongside the other two students, the judge said.

The court also stopped short of recognising breach of duty of supervision by guardians of the students. 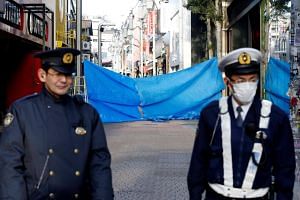 63 teachers overworked to death in Japan in 10-year period

The judge said that violence against the victim "started escalating" in the second semester of their second year of junior high school, Japan Times reported.

It was "predictable" that the boy might take his own life, as he was made to feel a sense of helplessness and despair through repeated acts to pressure him psychologically, the judge said.

According to the ruling, the boy was choked and forced to try to eat a dead bee at one point.

The former classmates claimed in court that they were playing with him and denied bullying him.

A third-party investigation committee set up by the city concluded in 2013 that bullying was the direct cause of the suicide.

The parents and the municipal government reached a settlement in 2015, with the city agreeing to offer an apology and pay 13 million yen in compensation.

In Japan, bullying is a major social issue. Elementary, junior and senior high schools in Japan reported more than 410,000 cases in fiscal 2017. Ten of the 250 students who committed suicide had been bullied at school, according to education ministry data.