TOKYO – Millions across central and eastern Japan were told to seek safer shelter on Saturday (Oct 12), as an  emergency heavy rain warning of the highest level was triggered across an unprecedented 12 prefectures with the relentless onslaught of a violent typhoon, Hagibis.

The potent storm, whose name means “speed” in Tagalog, made landfall at Izu Peninsula of Shizuoka prefecture, in central Japan, just before 7pm local time (6pm in Singapore). It was packing winds of up to 144kmh that left high-rises swaying in central Tokyo.

The Defence Ministry activated 17,000 personnel of the Self-Defence Forces to be on stand-by for immediate deployment, in case of emergency rescue operations. Tokyo and Nagano prefectures have reportedly sought help.

Separately, at 6.21pm local time, a moderate earthquake with a magnitude of 5.7 struck off the coast of Chiba prefecture, east of Tokyo.

The quake posed no tsunami risk but also shook buildings in Tokyo, prompting the Japan Meteorological Agency (JMA) to double up on mudslide warnings because soil had already been loosened by unprecedented levels of rainfall.

This was extended last night to Ibaraki, Tochigi, Fukushima, Miyagi and Niigata prefectures, with the JMA warning of unprecedented rainfall and swelling dams at an emergency news conference.

A Level 5 warning means that the situation is so dire that it is possible disasters have already occurred, though the full extent of damage cannot be immediately assessed due to imminent danger. 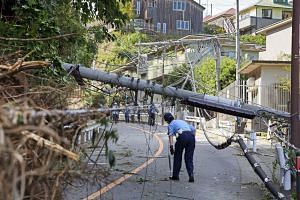 What was known at press time is that at least two people were confirmed dead: a 50-year-old man whose mini truck was blown over in Chiba prefecture, and a man whose home was buried in a landslide in Tomioka city in Gunma prefecture.

At least nine others were missing, including two in the Gunma landslide, and another two in a landslide in Fukushima.

Three were missing after a bridge collapsed in Tomi city in Nagano prefecture, plunging three cars into the Chikuma River.

One was swept away by floodwaters in Gotemba in Shizuoka prefecture, and another in Sendai in Miyagi prefecture.

At least 75 people were injured, including several people in western prefectures of Osaka, Hyogo and Tokushima who were blown off their feet by sudden gusts.

About 430,500 homes were without power as at 11pm local time, mainly in the Greater Tokyo region, the world’s most populous metropolitan area.

The 19th typhoon of the year caused strong winds that blew off the roofs of several homes in Saitama and Chiba prefectures, toppled a crane in Shibuya, and felled a lighthouse in Kochi prefecture in western Japan.

The storm also brought unprecedented rainfall over wide areas, including the popular mountainous tourist attraction Hakone, a hot springs town in Kanagawa prefecture which was pounded by driving rain, receiving  a national record of nearly 1,000mm in one day.

Formula One: Saturday action of Japan GP cancelled due to typhoon; qualifying moved to Sunday

Footage on public broadcaster NHK showed Tokyo’s Meguro and Tama rivers swollen, while the Sumida River at the foot of the Tokyo Skytree overflowed.

The ferocity of the storm brought Tokyo to a virtual standstill on Saturday, as train services were halted and malls and eateries shuttered.

Shelves were emptied at many supermarkets and hardware stores by Friday (Oct 11), with the public heeding the weatherman’s call to prepare for the worst.

The typhoon has also forced the closure of the Tokyo Disney Resort in Chiba, as well as the Universal Studios Japan in Osaka. It has also forced two Rugby World Cup matches and a host of other events to be shelved, and disrupted the Japanese Grand Prix this weekend.

Hagibis comes a month after Typhoon Faxai lashed eastern Japan with what had been record-breaking winds. The impact was largely felt in Chiba prefecture, which damaged 34,275 buildings and left as many as 935,000 homes without power at one point.