Including Lee Jae-yong, heir to the country's No. 1 family-run business, Samsung, 17 business leaders from a variety of industries joined the 52-member special delegation, created as part of the Moon government's "new economy" initiative for the Korean Peninsula.

LG Corp. Chairman Koo Kwang-mo was one of the first among the chaebol chiefs to arrive at the east-side parking lot outside Gyeongbok Palace, where the delegation members gathered before boarding a bus for the Seoul Air Base.

In response to The Korea Herald's question of whether he had made sufficient preparations ahead of the visit to Pyongyang, Koo nodded "yes".

This is the first official public appearance for Koo, the fourth-generation leader of Korea's fourth-largest business group, since he took office in June.

Samsung Electronics Vice-Chairman Lee offered no comments in response to reporters' questions upon his arrival.

However, before his departure, Lee held a last-minute meeting with CEOs Rhee In-yong and Chung Hyun-ho to discuss Samsung's possible business plans in North Korea and finalise a corporate message about the Pyongyang visit. 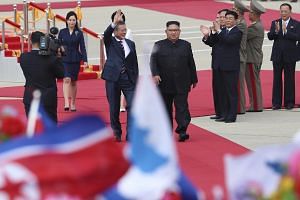 5 impressions from Day 1 of inter-Korea summit in Pyongyang

SK Chairman Chey Tae-won belatedly got on the airport-bound bus, saying: "I will talk about it later," referring to the group's plans for business in the North. SK Group is South Korea's third-largest conglomerate and its affiliates include the country's biggest mobile carrier and the world's second-largest memory chipmaker, among other businesses.

Sohn briefly mentioned that the group might consider launching "some cultural and food businesses" in the North.

Most of the business delegates remained extremely careful to avoid discussing potential business opportunities in North Korea, which is still the target of international sanctions imposed by the UN Security Council.

The presidential office acknowledged that the business leaders' Pyongyang trip was an opportunity for them to prepare for the future, rather than to establish business operations in the North immediately.

"Under the current circumstances, there will be some areas that can be discussed and areas that can't be," said Yoon Young-chan, senior secretary to the president for public communication, during a briefing.

"It is also difficult to say whether it's about time to lift the sanctions," he said.

"We are coordinating with the international community (on the issue of) international sanctions, and some changes could be made if new conditions are (established), including (further) talks between North Korea and the United States."