SEOUL (THE KOREA HERALD/ASIA NEWS NETWORK) - Around 8 o' clock on a recent Sunday (July 7) morning, more than 30 people waited in line outside a building in eastern Seoul. At the end of the line stood a sign reading: "You will not be able to buy from here on."

Just before 9am, a man came out, opened the door and started clearing the street where people stood in line, as they rushed into a small shop. Inside, there are no tables, just a stack full of very fat and thick macarons. In less than 50 minutes, the door closed again. At the sensational SomSom Bakery, the day's business was over.

"I arrived just after 5.30am," said Kim Hee-ja, who was the first in line that morning. She and her daughter each held a bulging cooling pack of macarons. They had bought almost 30 macarons each.

"It takes less than two weeks for our family to finish up this lot," Kim added.

Many others left the shop with similar bags.

According to Jeong Eun-ji, the owner and patissier of SomSom, around 1,000 macarons were sold that day. 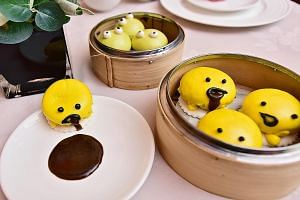 A taste of Singapore food in Seoul

WHERE LADUREE AND PIERRE HERME FAILED

South Koreans' frenzy over almond cookies began around 2014-2015, with three of France's famous dessert brands competing to win over Korean palates. In 2017, however, two of them - Laduree and Pierre Herme - withdrew. Hugo & Victor, which arrived here at the end of 2015, has expanded its presence to five outlets.

Where the world-renowned brands failed, local patissiers started to gain traction by making the confections bigger and fatter.

Called "ttung-carons" or "fatcarons" - ttung comes from the Korean word for fat - the dessert's local adaptation has taken off recently, largely driven by social media. On Instagram, nearly 340,000 posts have been tagged with the word, and multiple YouTubers have shared videos of themselves digging into these plus-sized treats.

"In the original French macarons, the cream filling between the two cookies is so thinly spread that it is barely visible on the outside. However, the Korean version has a much thicker filling and the taste of the cream overwhelms that of the cookies," said Eom Hye-ji, the main pattisier of dessert shop Merci Beaucoup in Seoul.

"Many wanted a bigger size and more cream for the same price," Jeong said. "The number of shops selling fatcarons have been on the rise recently, and the competition seems to be making the macarons even thicker and fancier than before."

Indeed, from uncut fresh fruit to chunks of chocolate and whole pieces of popular crackers, macaron makers in Korea seem to be churning out outrageous variations daily. The flavours are as diverse as one can imagine as well. Garlic bread, corn cheese, truffles and pizza are just a few of the exotic flavors available.

Almost triple the size of original macarons, fatcarons cannot be devoured in one bite. "People usually slice the fatcaron into four pieces to eat them. I also eat them this way," Jeong said. 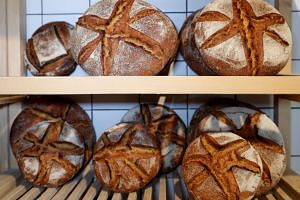 South Koreans are eating more bread than rice and noodle

On this observation, shared by many other fatcaron lovers, Merci Beaucoup's pattisier Eom explains: "Sugar still takes up a big part of the cream filling. But as we put in a variety of ingredients other than just the cream, the fat macarons tend to taste less sweet."

She added that Koreans do not like desserts that are too sweet.

Although some still perceive macarons in general as an expensive dessert, fatcarons can cost less than branded, authentic macarons.

With the combination of reduced sweetness, bigger size and affordable prize, fatcarons have become a to-go guilty pleasure for fans.

"It was surprising at first to see how many men came to my shop," said Lee Se-lyun, owner of HeyMe Macaron in Apgujeong, Seoul. "The men come back from time to time, to buy presents for their girlfriends and wives on birthdays and anniversaries."

In fact, Instagram is not just a platform for customers to share images of the outrageous dessert they are having, but also acts as an online show-window for solo shops to promote their products.

Some went further to use the social media as a platform to communicate with their customers. Many individual shops not only shared news of special flavours but also notified frequent customers of early closing due to sellouts.

Lee Eun-hee, professor of consumer science at Inha University, says the fatcaron boom could not have been possible if it were not for social media.

"Social media is a space where people search for something new and, at the same time, flaunt news about themselves. In that sense, fatcarons, which often take different shapes and forms according to the creators, are ideal items to show off on Instagram."

Meanwhile, Lee explains such a theory is not only about fancy desserts, but retail trends in general.

"People are looking at their smartphones all the time these days, and social media, especially Instagram, is something they can enjoy without putting in too much energy. Compared to platforms such as YouTube, where they have to sit and watch videos, images provide strong messages which the consumers can grasp in an instant," she said.