BEIJING/CHICAGO (Reuters) - The executive from one of China's biggest soybean crushers sat on a panel at a Kansas City agricultural exports conference, listening to an expert beside him explain why China would remain dependent on US soybeans to feed its massive hog herds.

When his turn to speak came, Mu Yan Kui told the international audience of soy traders that everything they just heard was wrong.

Then Mu ticked off a six-part strategy to slash Chinese consumption and tap alternate supplies with little financial pain.

"Many foreign business people and politicians have underestimated the determination of Chinese people to support the government in a trade war," said Mu, vice chairman of Yihai Kerry, owned by Singapore-based Wilmar International.

The comments echo a growing confidence within China's soybean industry and government that the world's largest pork-producing nation can wean itself off US soy exports - a prospect that would decimate US farmers, upend a 36-year-old trading relationship worth US$12.7 billion last year, and radically remap global trade flows.

Just one prong of the strategy Mu detailed - to slash soymeal content in pig feed - could obliterate Chinese demand for US soybeans if broadly adopted, according to Reuters calculations.

Cutting the soy ration for hogs from the typical 20 per cent to 12 per cent would equate to a demand reduction of up to 27 million tonnes of soybeans per year - an amount equal to 82 per cent of Chinese soy imports from the United States last year. 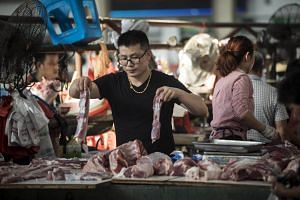 China deploys soya beans in trade war, but may end up hurting its own economy

Soybean meal provides the protein and amino acids that pigs need to thrive, but reducing their use will be easier in China than elsewhere because farmers here have long included more soy than needed to keep their hogs healthy, according to industry experts in China and the United States.

The standard 20 per cent ration dates to a recipe promoted by U.S. soybean industry advocates in the 1980s as they entered what was then a newly opened market for foreign investment.

Most Chinese pig farmers have continued to use high levels of soymeal even as their US counterparts reduced soy content after advancing the science of optimising feed ingredients to provide the best nutrition at the lowest cost.

Major Chinese agriculture firms have recently started adopting the same tactics, but the nation's pork sector remains dominated by smaller operations that - until now - didn't have a strong financial incentive to justify the time and expense required to overhaul feeding systems and formulas, industry experts said.

Now, China's 25-per-cent tariff on US soybeans - a retaliation against levies by US President Donald Trump on a wide range of Chinese imports - is accelerating the push to slash soymeal rations.

A feed mill owned by Beijing Dabeinong Technology Group Co , for instance, plans to eliminate imported US soybeans from its feed mix by October, said Zhang Wei, a manager at the mill, one of China's top farmers and feed makers.

The firm will replace soy imports with more cornmeal and alternative protein sources, including domestically produced soymeal, which has typically been grown for human consumption.

At the Kansas City conference, held by the US Soybean Export Council, Mu highlighted reduced soymeal rations as part of a broader strategy, including seeking alternative protein sources such as rapeseed or cotton seed; tapping surplus soybean stocks, including a government reserve, and domestically grown soybeans; and continuing to boost soybean imports from Brazil and Argentina.

Mu's presentation reflects the line of thinking now broadly accepted by China's government and its state-run agriculture firms - and marks a shift since the onset of the trade war.

When Beijing threatened soybean tariffs in April, Chinese feedmakers and agriculture experts worried the move would inflict more pain on the domestic industry than its top trading partner because China would struggle to replace U.S. supplies.

Seated to Mu's right at the panel table was Wallace Tyner, a Purdue University economist who had moments earlier argued that the United States and China would suffer about equal financial damage from the soybean trade war.

The tenants of the China strategy Mu outlined were achievable, Tyner said in a later interview, "but each one of them cost money." USDA spokesman Tim Murtaugh downplayed the threat of China displacing US soybean supplies.

The Trump administration, he said, is analysing import demand and ultimately aims to win back access to the China market under better terms.

"It's not surprising that China would float this idea, given the trade dispute," he said.

A REVOLUTION IN TRADE

In the early 1980s, the U.S. farm lobby sold Chinese farmers on the promise that they could use imported soybeans to slash the amount of time needed to their fatten pigs, said Dabeinong's Zhang and Feng Yonghui, chief analyst and market veteran with Soozhu.com, a Chinese hog consultancy.

The US industry wanted access to a market with more than a billion people and rising per capita income, and the American Soybean Association opened an office in Beijing four years into China's landmark economic reforms.

"They knew someday that China would need to import," said John Baize, president of John C. Baize & Associates and a consultant for the U.S. Soybean Export Council.

China's communist government saw another opportunity in the arrival of US soy - for profits and jobs from the massive soy-crushing industry it would build to process imported beans into meal and oil, with plants strategically located near seaports.

Beijing fostered the industry with a tax system that encouraged soybean imports but punished those of finished soy products.

Last year, it imported 95.5 million tonnes, including 32.9 million from the United States, according to Chinese customs data. US soybean plantings shot up from nearly 71 million acres in 1982 to nearly 90 million this year, worth a total of US$41 billion.

Now, China is urgently looking elsewhere for imports. Chinese crushers bought all the South American beans they could over the past few months, building record stocks of beans and meal.

On Sept 4, an executive of top bean processor Jiusan predicted that China will only need to buy 700,000 tonnes of soybeans from the United States in the marketing season that starts this month, a tiny fraction of what it bought last year.

With no sign of a resolution to the trade war, Bob Metz, a South Dakota corn and soybean farmer, is making plans to reduce the number of acres he devotes to soybeans next spring. He's alerted his seed dealer that he may need more corn seed and less soy.

"It makes me very nervous," he said, because China has been such a dominant buyer of US beans.

James Lee Adams - a retired farmer from Camilla, Georgia, and past president of the American Soybean Association - was among those who worked in the 1980s to open the Chinese market to U.S. soybeans.

Now, he worries the profitable relationship could collapse.

"You develop trade partners over a long period, but you can lose them overnight," he said. "When you start becoming an unreliable supplier, people are going to start looking elsewhere."