JAKARTA (REUTERS) - Indonesian students who took to the streets this week to block new laws they feared would threaten hard-won reforms mobilised amid a flurry of online activity that included tips and advice from pro-democracy protesters in Hong Kong.

Punchy hashtags were used to create a buzz, crowdfunding helped raise funds for the protests and the experiences of students in Hong Kong on dealing with tear gas was translated into Bahasa Indonesia in posts on social media and on message groups.

Faced with the protests, President Joko Widodo said on Thursday (Sept 26) he was reconsidering a new law governing the country's anti-graft agency, which many believe would strip it of meaningful power.

His apparent retreat also came days after he ordered a delay in passing a contentious criminal code that would have effectively served as a legal basis to punish extramarital sex and penalise insulting the president's honour, among other things.

The latest demonstrations have been the biggest student protests since 1998, when they contributed to the fall of former strongman leader Suharto and a return to democracy.

Danu Rizky Fadilla, a 22-year-old at the State University of Jakarta, said the Internet was key in mobilising student support against the proposed laws.

On Monday, just before the protests started, social media was filled with to-do lists for students who were planning to protest. Photos shared on Twitter ranged from how to wear masks in the event of tear gas being fired, to bringing your own "reusable" water bottles and to dress for the heat. 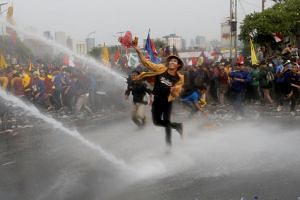 "Reformasi" (Reform) was the battle-cry for activists during the anti-Suharto protests, which ultimately paved the way for his ouster and the restoration of democracy and press freedom.

This week, a list of student demands was circulated on social media, which alongside opposing the new laws included stopping forest fires and removing a heavy military presence in the restive easternmost area of Papua.

A video of techniques to deal with tear gas translated into Bahasa on Tuesday evening quickly went viral on social media, receiving more than 1 million views, with captions ranging from"Can be copied!" to "Tips from Hong Kong".

Some Hong Kong protesters responded with messages of support for Indonesian students, calling for them to stand together.

Alex, a student activist at the Chinese University of Hong Kong, told Reuters he learned about the Indonesian movement on Twitter, and said he was now posting hashtags to encourage solidarity. He declined to give his surname.

In a popular tweet, Alex posted a photo of folded paper birds, one decked out in the red and white of the Indonesian flag, while the other mimicked Hong Kong protesters' multi-colored Post-it "Lennon Walls".

In the comments, Indonesians thanked him, while he replied in Bahasa, "Tetap kuat" (Stay strong). He said he used Google Translate to find the words.