BEIJING (NYTIMES) - Chinese parents were in an uproar on Monday (July 23) after reports that hundreds of thousands of children might have been injected with faulty vaccines, the latest scandal to hit the nation's troubled drug industry.

The outcry came after a government investigation and news reports showed that a major drug producer in north-east China, Changchun Changsheng, had violated standards in making at least 250,000 doses of vaccine for diphtheria, tetanus and whooping cough.

While there have been no reports of deaths or illnesses related to the substandard vaccines, the news has rattled public confidence in the government and rekindled fears that corruption and abuse in the nation's vast pharmaceutical industry are placing people at risk.

It has also undermined President Xi Jinping's efforts to restore faith in medicine produced in China at a time when the country is striving to become a leading producer of pharmaceuticals.

After a series of scandals involving tainted food and drugs in China, many parents said they were fed up and called on the government to take more severe action.

"We always say that kids are the nation's future, but if we can't ensure the safety of such a future, what does the future hold for us?" said Huo Xiaoling, 37, who works in marketing in eastern China and has a one-year-old daughter who received a vaccine made by Changchun Changsheng.

Huo said she would no longer buy Chinese-made vaccines because she could not trust officials to clean up the industry.

"We don't know who we can believe in," she said. "As Chinese, we probably should have confidence in our country, but getting hurt again and again has made us lose faith."

Xi has sought to justify his centralisation of power by delivering an efficient and ethical government, but a series of medical scandals has deepened grievances about the health care system and resurrected complaints about government secrecy, especially among the rapidly growing middle class.

On Monday, Xi struggled to contain public anger over the scandal, the third crisis involving vaccines since 2010. In a statement on Monday while visiting Rwanda, he called the events "terrible and shocking" and said the government would "investigate to the very bottom".

Still, many parents were sceptical about the government's response. As of Monday evening, a hashtag referring to the scandal had received tens of millions of views on Weibo, a popular social media platform.

One image circulating online showed a screenshot of a news item touting a promise from Premier Li Keqiang on Sunday to "resolutely crack down on all illegal and criminal acts that endanger the safety of people's lives". Next to it was a similar statement that Li offered after another vaccine scandal in 2016, suggesting the government had done nothing to address the problem.

"I hope they don't bitterly disappoint the people again," one Weibo user wrote.

Changchun Changsheng, the fast-growing company at the centre of the scandal, also came under attack. The company, which is based in the north-eastern province of Jilin, had more than US$235 million (S$320 million) in revenue last year, according to Chinese news reports, and it is listed on the Shenzhen stock exchange.

Government investigators said this month that the company had produced the more than 250,000 substandard doses of a vaccine for diphtheria, tetanus and whooping cough, and that it had fabricated data related to the production of rabies vaccines.

Some said employees shown to have broken the law should receive the death penalty.

"If you hurt our children," one user wrote on Weibo, "we'll ask for your life."

The company's leaders apologised in a statement on Sunday, saying they felt "deeply ashamed". Under pressure from the government, the company has halted production and recalled its vaccines.

Chinese officials have made pharmaceutical innovation a national priority and vaccines are now a booming industry with more than US$3 billion in revenue each year.

But persistent safety problems have raised questions about the industry's growth. This month, the US Food and Drug Administration announced a voluntary recall of a popular blood pressure medication made in China. 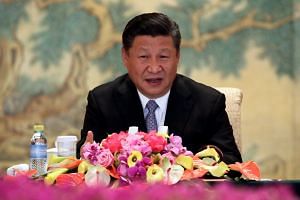 Public health experts worry that the scandal may prompt Chinese families to opt out of vaccinations, even though they are required by law. The government has said that children who received faulty vaccines should be taken to a hospital to receive another immunisation.

"It takes years to build up confidence and one scandal to break it," said Ashish K. Jha, director of the Harvard Global Health Institute.

The Chinese news media also warned of the dangers of turning away from vaccines.

"This incident could become a public health crisis should it not be handled in a reasonable and transparent manner," said an editorial in China Daily, a state-run English-language newspaper.

"The government needs to act as soon as possible to let the public know it is resolved to address the issue and will punish any wrongdoers without mercy."

After a similar scandal in 2016, involving about 2 million improperly stored vaccines that were sold around the country, many parents voiced concerns about the reliability of vaccines and said they were reluctant to risk further vaccinations for their children.

The Beijing office of the World Health Organisation declined to comment on Monday.

As news of the scandal spread on social media, many parents rushed to check their children's immunisation records.

Zhang Zhiqian, 32, said his three-year-old daughter had been given vaccines made by Changchun Changsheng in 2015. He said he wanted to take part in the government's inquiry because he had lost faith in officials to regulate the industry.

"I don't believe in their internal top-down investigation," said Zhang, from the northern city of Shijiazhuang. "It's easy to tell that most other parents don't trust them either."