YAN'AN, SHAANXI - For Singapore to continue to find new and productive areas where it can engage China, relationships between officials from both sides have to be constantly renewed, said Deputy Prime Minister Teo Chee Hean.

This must go beyond just meeting central officials in Beijing to ensuring that successive generations of leaders build on these ties, he added.

Visits to provinces like Shaanxi and to Communist Party of China cadre training schools, such as in Pudong and Yan'an, provide a deeper and more nuanced understanding of what China is doing and where it is going, he added.

On Monday (April 15), Mr Teo and other Singapore officials toured the Yangjialing Revolutionary site where Chairman Mao Zedong and other Chinese leaders lived when the communists were based in Yan'an from 1938 to 1947. They also visited Liangjiahe village, where President Xi Jinping spent seven years as a sent-down youth between 1969 and 1975 as the Cultural Revolution swept across China.

"If you just go to Beijing and meet officials, you have a very superficial understanding of what China is," he said. In contrast, ground interaction "helps us to work more closely and better with the Chinese," he added.

"Our main focus is really to see how we can work together in the economic field, in social governance and exchanging of views... through our interaction, we influence each other in the direction in which we take society and the region." 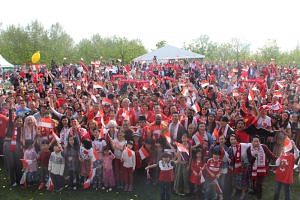 Singaporeans across China gather to enjoy a slice of home

China should also be seen not as a snapshot but an ongoing movie, which requires continued focus, said Mr Teo. "It's...one of the biggest human dramas in the world today: how you raise 800 million people out of poverty over such a short space of time, and where this giant of a country is going in the future."

Minister of Trade and Industry Chan Chun Sing agreed, noting that the just-concluded 7th Singapore-China Forum on leadership was possible because of trust built over decades.

Minister for Culture, Community and Youth Grace Fu said this visit to Shaanxi also captured the depth and spectrum of engagement between Singapore and China.

She noted that she first met Vice-Premier Han Zheng in the 90s in her capacity as a business executive, when Mr Han was an official in Shanghai.

"I suppose this is how relationships are established over the years: you meet them in the middle of their career, and very often some of them will take on more important positions later on," she said.

Dr Janil Puthucheary, who is Senior Minister of State for Transport and Communications and Information, said China remains keen to engage Singapore because the challenges it is grappling with today are also faced by Singapore.

"They are also concerned about the ecological effects of development and climate change, again something we are turning our attentions to," he said.

"Despite all the differences, there are many, many more things we have in common, and these types of platforms...and deep engagement that we've built up over the years allow us to seek out those opportunities for common challenges, common solutions, common thinking, and to deepen the partnership further."