TOKYO - US Secretary of State Mike Pompeo, reacting to a provocative statement from North Korea, said that if Washington's demands were 'gangster-like', then the whole world were gangsters.

His third visit to North Korea was meant to hash out the nitty-gritty on how to implement the joint declaration inked by US President Donald Trump and North Korean leader Kim Jong Un, whose official title is Chairman of the State Affairs Commission, in Singapore on June 12.

While Mr Pompeo on Saturday touted "progress on almost all of the central issues", the North's Foreign Ministry hours later slammed the US for its "deeply regrettable" attitude in making "unilateral and gangster-like" demands.

Even so, the US envoy on Sunday insisted again that he thought the talks were "in good faith and productive".

He said: "I'm counting on Chairman Kim to be determined to follow through on the commitment that he made.

"If those requests were gangster-like then the world is a gangster, because it was a unanimous decision at the UNSC about what needs to be achieved," he added, referring to the United Nations Security Council's crippling sanctions regime against the North. 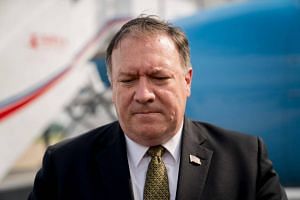 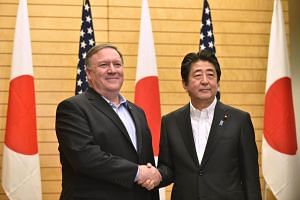 His optimism, however, came in marked contrast to how the North perceived the talks, which had been the highest-level negotiations since the June 12 summit.

An unnamed spokesman for North Korea's Foreign Ministry, in the statement carried by the Korean Central News Agency, said:

"The US side came up only with its unilateral and gangster-like demand for denuclearisation, just calling for CVID, declaration and verification, all of which run counter to the spirit of the Singapore summit meeting and talks."

This, he said, has "stoked distrust and increased the danger of war".

The spokesman also blasted the US for "making great publicity" about the suspension of its joint military drills with South Korea, saying that it was hardly a concession because it was a "highly reversible step which can be resumed anytime, at any moment as all of its military force remains intact in its previously-held positions without scraping even a rifle".

Calling for a "phased and synchronous approach", the statement added: "This is incomparable with the irreversible step taken by (North Korea) to explode and dismantle the nuclear test ground."

On Sunday, Mr Pompeo appeared dismissive of these remarks, to the point of sounding slightly exasperated when questioned.

He said when asked about the statement a second time: "You, again, referred to their statements after the event. I was there for the event. I know actually what precisely took place."

He added: "When we spoke to them about the scope of denuclearisation, they did not push back. It wasn't my language, it was the language of Chairman Kim, he committed to complete denuclearisation and the commitment that Chairman Kim is important and powerful.

"I am convinced that he understands the commitment he made, and I am hopeful we will find a path forward to achieve that commitment that Chairman Kim himself made personally to President (Donald) Trump, and the world, in a signed agreement."

Dr Yasushi Watanabe of Keio University told The Straits Times that Mr Pompeo might have shrugged off the statement as it appears to be geared towards domestic consumption.

“The Kim regime wouldn’t want to be seen as if they were somehow being pressured to cave in to the US’ demands,” he said.

And while both sides are still at the very tentative stages of trust-building, he said: “It’s going to take time, but eventually we cannot just keep on going this way because we will end up going nowhere.”