BEIJING - Throughout the three-hour flight from his hometown in Yunnan province to Beijing last week, eight-year-old Wang Fuman could not take his eyes off the scenery from his window seat.

It was the first time he was taking a plane which would take him to the Chinese capital, his dream destination.

"I have never left home before, this is my first long journey outside my hometown," Fuman told The Beijing News after arriving in Beijing last Friday (Jan 19).

The boy melted hearts and drew attention to the plight of China's 61 million "left-behind" children of migrant workers when pictures of his ice-covered hair and eyebrows went viral earlier this month. He was dubbed the "Ice Boy" or "Snowflake Boy" by the Chinese media.

Wearing only thin clothing, he walked for an hour in freezing temperatures from his home in a poor county in Yunnan province to his school, Zhuanshanbao Primary School, 4.5 km away on Jan 8. His principal took pictures of him and shared them on social media.

The photos also showed his rough hands, which had turned dry and wrinkly. He also suffered from frostbite.

Last Friday, Fuman arrived in Beijing for a three-day trip, accompanied by his 10-year-old sister Fumei and father Wang Gangkui. It was sponsored by a Chinese Communist Party propaganda website, China Peace.

The website, according to South China Morning Post, is run by the party's Central Political and Legal Affairs Commission, which oversees policing and other work to do with maintaining social stability.

In Beijing, Fuman experienced for the first time the warmth offered by the central heating system when he checked into the hotel on Friday.

"It's very cold at home, but very warm in Beijing. At home, we have to burn charcoal at night for warmth. In Beijing, the rooms are so warm - I only need to wear one layer of clothing. This is the first time I've come across heating, it really is a miracle," he told Beijing News.

He also tasted Beijing's famed roast duck for the first time during the trip.

It was also the first time he had seen skyscrapers and so many cars on the roads.

"The Beijing I am seeing is very modernised, very different from the one I had imagined," he said in the interview.

"I want to see how children in Beijing go to school, and whether they need to walk a long way every day."

On Saturday, he attended the early morning flag-raising ceremony in Tiananmen Square. His itinerary included the Great Wall and the Forbidden City.

The siblings also toured the headquarters of the police special unit in Beijing and the largest police school, the People's Public Security University of China during his visit.

The boy had previously told the media that his dream was to go to Beijing and become a police officer when he grows up.

The plight of the Primary 3 student from Ludian county, a poor area in the southwestern Yunnan province, touched many hearts across China and abroad. The family and Fuman's school have since received donations of money, warm clothing and offers of winter heating. 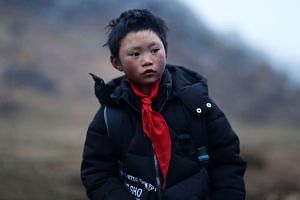 'Frost Boy' in China warms up the Internet, and stirs poverty debate

State broadcaster CCTV reported that 100,000 yuan of the money went to the boy's primary school.

His father was also offered a job in his hometown so he will no longer have to work away from home.

His father told Beijing News he hoped his son could stay in Beijing and study.

"Actually the school doesn't have to be in Beijing. I'm happy so long as it is a school which can take good care of my child and he doesn't have to walk in the cold to go to school," said the 28-year-old father.

The boy's mother has left the family.

The father Wang Gangku was working in Yunnan's provincial capital Kunming and had not returned home for months.

"When I saw the photo, I felt pain in my heart. I couldn't stay home and look after my children - I had no choice," the father was quoted as saying.

"If I didn't leave and find work somewhere else, my two kids would've had nothing to eat," he said.

He added in the interview with Beijing News he was not sure how his son would adjust once interest in his story dies down.

"Even though there are many people who are concerned about us right now, I've been thinking how will my child cope when he no longer gets the same attention. There are a lot of things to think about," said the father.