Mr Bang's daughter came under fire after MBC TV released the recording of her verbally attacking and threatening the driver, who is in his 50s.

Mr Bang is the younger son of Mr Bang Sang-hoon, president of the biggest newspaper in South Korea, Chosun Ilbo.

In the audio clip, The Korea Times reported, the girl is heard yelling at the driver: "Hey, you! I will speak to my mum today… in order to make you lose your job."

"You are fired! You are really insane," she continues. "Hey, I'm speaking to you with good words. Perhaps I'm the only person who treats you like this."

After the driver told the girl to just fire him, the child lashed back: "Do you think I would get embarrassed? I'm not such a person who freaks out with this."

"You are a crippled guy - crippled without arms, legs, face, ears and mouth… especially devoid of mouth and ears… You are insane."

In an official statement released by TV Chosun on Thursday, Mr Bang Jung-oh apologised for his daughter's behaviour and announced he would resign.

"I express deep regret at causing the public trouble related to my child," Mr Bang said in the statement. "I will step down from TV Chosun's presidency to take responsibility for what has happened."

"I apologise sincerely to the chauffeur, who has been distressed (by my daughter's abusive behaviour)," Mr Bang added.

The driver was reportedly dismissed by the family last month with no explanation.

The expose follows a string of misbehaviours by unruly family members of chaebol leaders which tarnished the image of the conglomerates after public backlash. 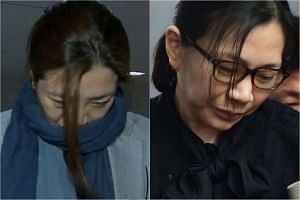 Ms Heather Cho Hyun-ah, daughter of Korean Air chairman and CEO Cho Yang-ho, triggered the infamous "nut rage" incident in 2014 on a flight from New York to Incheon when she made a flight attendant and cabin manager kneel before her for serving her macadamia nuts in an unopened bag, instead of on a plate. Ms Cho, who was then vice-president of the airline, then ordered the plane back to the gate to eject them.

For obstructing aviation safety, Ms Cho was charged and sentenced to a year in prison. She was released three months later.

Her siblings, Ms Cho Hyun-min and Mr Cho Won-tae, and mother Lee Myung-hee had also hit the headlines for their abusive behaviour.

The patriarch of the family, Cho Yang-ho, was indicted in October with embezzling 19.6 billion won (S$23.8 million) and unfairly awarding contracts to companies controlled by his family members. Cho is the chairman of Hanjin Group, which includes Korean Air and used to own the now-bankrupt Hanjin Shipping line.

The 69-year-old is also accused of taking 152 billion won from the state insurance agency in medical care benefits by illegally running a pharmacy under a borrowed name, AFP reported.