TOKYO - Less than two months after Mr Isao Kakehi, 75, donned a wedding kimono in 2013 for his second marriage, he collapsed and died.

His bereaved wife Chisako was inconsolable when police interviewed her. Given his age, the police were quite ready to close the case as a natural death until a sharp-eyed detective began to suspect Mrs Kakehi, 70: Could the grieving widow, who looked more like your neighbourhood granny, be a money-grabbing murderess instead?

Three years after her arrest in 2014, the unlikely femme fatale was sentenced to hang by a Kyoto court last week. She was found guilty on three murder charges and one count of attempted murder.

Kakehi - dubbed the Black Widow by Japanese media - killed her lovers with health capsules that had been laced with cyanide.

Her lawyers have appealed against the "unjust" sentence on the grounds of diminished responsibility as she has early-stage dementia, and argued that the prosecution failed to prove how she obtained or stored the poison.

All in, Kakehi had been romantically linked with between seven and 14 men, including her first husband, who died in 1994, aged 54, according to various reports.

The deaths continued for two decades until her arrest in November 2014, almost a year after her husband, Mr Kakehi, died. By then, she was already back on the prowl and seeing two men, who were warned by police to break up with her.

Kakehi had been quite the shape-shifter, adopting the surnames of her four husbands and other common-law partners to open dozens of bank accounts.

By an official count, she pocketed at least one billion yen (S$12 million) in insurance and inheritance payouts, which she squandered away on failed investments in highly speculative financial products.

She had signed up with at least 10 different matchmaking agencies in various prefectures, and specified that her prospective spouse must be childless, elderly, have his own place and, ideally, be rich. She did not mind those with pre-existing health issues.

On meeting the men, she turned on the charm, making them fall for her and eventually making her the sole beneficiary of their assets.

She had, for instance, told Mr Kakehi: "I will stay with you for the rest of my life."

Criminal profiler Enzo Yaksic told The Straits Times: "The black widow is among the most dangerous of the goal-driven serial homicide offender sub-types, due to the tactics she uses when clouding the hearts and minds of her victims before poisoning their bodies and eliminating them."

Mr Yaksic, director of the Atypical Homicide Research Group at Boston's Northeastern University, added: "The black widow must continue her charade unabated for months and oftentimes many years before being able to finalise her meticulously crafted plans."

Kakehi's crimes, he added, were aided by modern-day dating technology, which allowed her to "narrow down the potential victim pool to her preference for affluent males who were both elderly and isolated".

Kakehi was born Chisako Yamamoto on Nov 28, 1946, growing up in a middle-class family in Kitakyushu city, Fukuoka, where her father worked in a steel factory.

She reportedly had good school grades but her dream of going to university was dashed by her traditionalist father, who deemed it improper for a girl to pursue higher education.

She worked as a bank teller from 1965, quitting in 1969 when she married her first husband, with whom she had two children. He was an Osaka-based truck driver turned successful entrepreneur with a fabric-printing company. That was also how she was introduced to cyanide, which is used in commercial printing.

He died in 1994, aged 54, on the very night that he was deemed fit to be discharged from hospital after suffering a heart attack.

Kakehi tried to keep the firm afloat alone, but it folded in 2003.

One year later, she married a Gunma native who was a manager at a pharmaceutical wholesaler. He died of a stroke in 2006, aged 69.

In February 2008, she married Mr Toshiaki Yamamoto, 75, who ran an agricultural cooperative. He died three months later of a heart attack.

Suspicions now hang over the cause of these deaths, initially seen as without foul play. But these are impossible to prove since the bodies have been cremated. 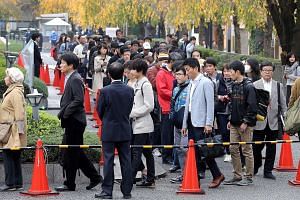 The police looked into other cases and Kakehi was subsequently charged with three counts of murder. She also faced a charge of attempted murder of Mr Toshiaki Suehiro. All four men, including Mr Kakehi, were in their 70s.

She was engaged to Mr Suehiro, a former prefectural official from Kobe, in 2007. He collapsed in the middle of a busy street that same year and was put on life support until 2009, when he died of cancer. Police investigators found traces of cyanide in a sample of Mr Suehiro's blood kept by the hospital.

In September 2011, Kakehi got engaged to Mr Masanori Honda, 71. Six months later, he died of arrhythmia, or an abnormal heart rate, while riding his motorcycle.

She was also seeing retired architect Minoru Hioki, 75, whose condition took a turn for the worse after they had dinner on Sept 20, 2013. The cause of death had initially been suspected to be lung cancer.

During her 135-day trial, a man in his 80s told the court he was seeing Kakehi around the time of her husband's death, Kyodo News said.

"My wife died and living alone was tough, so I wanted to live together (with Kakehi)," he said, adding that he still believed she was a "good woman".

The Asahi daily has described Kakehi as someone who loves to read, but dislikes mystery novels involving death as it scares her.

An Asahi reporter once asked her: "But didn't you feel fear when you killed people?"

She shot back: "You are bold enough to ask me such a question."