BEIJING (BLOOMBERG) - At the Shu Le County Education Centre, a sprawling three-story complex in China's far west region of Xinjiang, the dormitories feature bars on windows and doors that only lock from the outside.

Inside are hundreds of minority Muslim Uighurs who have no way of leaving without an official escort, even though Chinese officials who took a group of foreign journalists around the "transformation through education" camp this week insisted they were there voluntarily.

"If they don't want to come, they will have to go through judicial procedures," Mr Mamat said after a pause, adding that many stay for at least seven months.

Shu Le is one of an unknown number of re-education camps in Xinjiang, a Muslim-majority region at the heart of President Xi Jinping's Belt-and-Road Initiative to connect Asia with Europe.

The US State Department says as many as two million Uighurs are being held in the camps, a number disputed by Chinese officials even though they won't disclose an official figure.

This week, a Bloomberg journalist participated in a government-sponsored tour along with four other foreign media organisations through three cities in Xinjiang.

The schedule was tightly controlled, with events planned from early morning to 11pm, and it included stops in many of the same places the Bloomberg journalist visited on an unguided 10-day trip to the region in November.

The trip shows that Beijing is becoming more worried about an international backlash that has intensified of late, raising risks for investors already assessing the impact of a more antagonistic US-China relationship.

Muslim-majority countries have begun joining the US and European Union in condemning China's practices, with Turkey's Foreign Ministry in February calling the "concentration camps" a "great embarrassment for humanity".

Mr Xi's policies to pacify the local population have spawned the biggest challenge to China's international reputation since soldiers were sent to put down protests in Tiananmen Square three decades ago.

After first denying the existence of the camps, China is now doubling down on the need for them, and beginning to defend them as a vital weapon against terrorism.

"You can see the Chinese government basically changed its position over time," said Ms Maya Wang, a senior China researcher at Human Rights Watch. "They switched from denial to a full-frontal counter-offensive."

Throughout this visit, Chinese officials said the foreign media had given a false impression of the government's efforts in Xinjiang. Most of the stops were focused on economic development and new education initiatives. The government's message was simple: Mr Xi's policies were helping pacify the region and grow the economy.

The exercise reflects Mr Xi's increased confidence on the world stage, where he's directly challenged Western-style democracy with a centralised model of government that uses advanced technology to reward, punish and ultimately control the behaviour of its citizens. He has a lot at stake in making it work: Backing down risks jeopardising the Communist Party's grip on power.

The Bloomberg journalist wasn't able to speak independently with any residents on the trip, or travel around without being followed. But the group was allowed to ask questions of officials, including repeated follow-ups that at times angered the hosts. 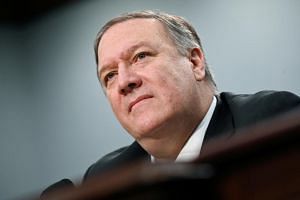 China slams US criticism of Muslim treatment as 'absurd'

The visit to Urumqi, Kashgar and Hotan stood in stark contrast to the trip the journalist took in November. Back then, minders followed close behind, searches occurred repeatedly and officials demanded he delete photos on his mobile phone. He could only glimpse the heavily secured camps from a distance.

This time around, government vehicles freely moved through various checkpoints, and metal detectors in public places were removed. Police officers who crowded city streets were gone. Still, his attempts to walk around unescorted were repeatedly unsuccessful.

After seeing the first camp, journalists were taken for a lamb lunch where women in colourful dresses danced to a song called Happy Xinjiang. An official ran after the Bloomberg journalist as he walked away from the scene.

"I think you must be lost looking for the toilet," he said. "Please let me show you."

In Urumqi, the media group visited a graphic anti-terror exhibition featuring photos of decapitated and dismembered bodies. Later on at the main mosque in Kashgar, where a painting of Mr Xi that earlier hung at the front had been removed, the imam said his father had been killed in a Uighur attack, leading him to "hate the terrorists".

China's crackdown on the region began after a series of Uighur strikes on civilians starting in 2013, including a flaming car attack in Tiananmen Square. The escalation alarmed the authorities who had repeatedly attempted to pacify Xinjiang, most recently after 2009 riots in Urumqi killed some 200 people. Most of the dead were ethnic Han, who make up more than 90 per cent of China's population and the vast majority of the Communist Party's leadership.

In Kashgar, the Bloomberg journalist asked one guide if a single cadre in Xinjiang believed in Islam, which would be against the rules in the officially atheist Communist Party.

"We haven't discovered one yet," said Mr Wang Quibin, a local party leader in the city. "If we did, they would need to be punished severely."

Once, he said, he asked a European official how their country controlled terrorism. "They said, 'We take measures to control it as long as human rights are protected.' I thought to myself, 'Then how can you control it?'"

There's no call to prayer anymore, he added, because everyone has watches. He said young Uighurs who grew beards were challenging local authorities in a similar way to anti-government protesters wearing yellow vests in France.

Another mosque in Hotan displayed copies of Mr Xi's book, The Governance Of China, at the same level as the Quran.

"In our country there is no way to put religion above the law," said Ms Gu Yingsu, head of the propaganda department in Hotan.

China has sought to make the Xinjiang re-education camps palatable to the rest of the world. It removed watchtowers and razor wire from the Shu Le facility earlier this year, according to Mr Shawn Zhang, a Chinese law student in Canada who analyses satellite imagery of the camps in Xinjiang.

A staircase featured a large mural of the Great Wall and the words "China Dream". We observed a class in which men all painted the same landscape. Others learnt practical skills such as Chinese massage techniques, and how to become waiters or nannies. There was even a class on botany.

The journalists were allowed to speak to detainees only with minders present. None appeared to be physically harmed. Bloomberg isn't identifying Uighurs in the camps, or using pictures of their faces, because it was unclear whether they were participating willingly in the events.

Many included the phrase: "I want to say that I am here voluntarily." Even more striking, the same detainees could repeat their answers word for word when asked.

The Bloomberg journalist asked their minders why the answers were so similar. Ms Gu, the official from Hotan, kept silent. One of her colleagues said the answers weren't memorised.

Mr Xu Guixiang, deputy head of Xinjiang's publicity department, said it was only natural they gave the same answers because they were asked about committing crimes.

"Perhaps it's because they are nervous speaking to a foreigner," he said. "It is difficult for them to express what they want to say in Chinese."