SEOUL (AFP) - North Korean leader Kim Jong Un will walk across the Demilitarised Zone on Friday (April 27) for a historic summit with the South's President Moon Jae In, the highest-level encounter yet in a whirlwind of nuclear diplomacy.

Pyongyang's atomic arsenal will be high on the agenda the first time one of its rulers sets foot in the South since the Korean War ended 65 years ago, and a peace treaty to formally end the conflict could also be discussed.

The meeting on the southern side of the truce village of Panmunjom - only the third of its kind after two in Pyongyang, the last 11 years ago - is intended to pave the way for a highly anticipated encounter between Kim and US President Donald Trump.

It comes after a rapid and spectacular diplomatic dance on the peninsula, orchestrated by Moon and set to the beat of the Winter Olympics in the South.

Kim sent a delegation headed by his sister to the Games and offered to put denuclearisation on the table in exchange for security guarantees. Trump accepted his proposal for a summit, and Kim went to Beijing to pay his respects to ally China in his first overseas trip as leader.

It is a stunning contrast from last year, when Pyongyang carried out its sixth and by far most powerful nuclear test to date and launched missiles capable of reaching the US mainland, while Kim and Trump traded personal insults and threats of war.

The UN Security Council imposed several more sets of sanctions on the North, including measures targeting its crucial coal, fishing and textiles sectors, along with oil imports.

Washington is demanding Pyongyang give up the weapons it has spent decades developing and says it needs to protect itself from a US invasion.

At the weekend Pyongyang announced a moratorium on nuclear tests and intercontinental ballistic missile launches, with Kim saying it had completed its goal.

It made no further commitments, but that did not stop Trump tweeting: "We haven't given up anything & they have agreed to denuclearisation (so great for World), site closure, & no more testing!"

On Monday, Moon said it was "a significant decision towards total denuclearisation of the Korean peninsula".

But the North has declared moratoriums before, and has also talked about denuclearisation, while previous agreements have ultimately foundered.

"There are many different ways to interpret North Korean wordings - literal interpretation, reading between the lines, or reading it in reflection of one's own hopes," said Koh Yu Hwan, professor of North Korean Studies at Dongguk University.

All three players had different motivations in the current process, he told AFP.

"The most urgent thing for Trump is preventing North Korea from completing an ICBM. For North Korea, it's preventing a US military strike and negotiate as a nuclear power to improve its economy.

"South Korea wants to bring North Korea and the US to dialogue for a peaceful resolution and to revive South-North ties."

In the complex, nuanced world of Korean nuclear negotiations the same phrase can mean radically different things to the different parties. 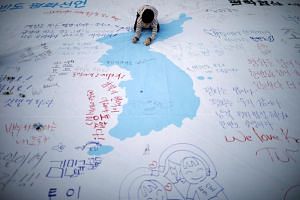 When Moon Jae In meets Kim Jong Un: What can be brought to the table? 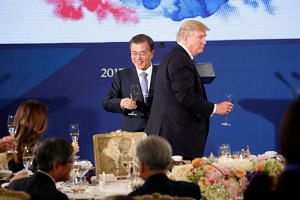 Moon Jae In: The man who brought Donald Trump and Kim Jong Un to the table

North Korean backing for denuclearisation of the peninsula has previously been code for the withdrawal of the 28,500 US troops stationed in the South and Washington's nuclear umbrella over its ally - seen as a non-starter for the US.

The North has not explicitly made that demand this time according to Moon - but it still wants a "security guarantee", potentially leaving plenty of room for disagreement.

Pyongyang has long sought direct negotiations with the US, but Moon said last week that the South could "work in the middle to narrow the differences between the US and the North to help forge agreement between the two countries".

In the end they did little to slow the North's military pursuits, which have accelerated under Kim, who may now feel he can negotiate from a position of strength.

But squeezed by ever-growing layers of sanctions imposed under Trump's "maximum pressure" campaign, he seems "more willing than ever before" to compromise his weapons push, said Hong Min, analyst at the Korea Institute for National Unification.

An "ideal scenario" would be Kim expressing a clear commitment to denuclearise on Friday, Hong said, before laying out specific plans in the summit with Trump such as a timetable to let UN inspectors into its nuclear facilities.

But some analysts are sceptical, warning that despite Kim's headline-grabbing offer to suspend nuclear and missile tests, the North may in fact have no need for them, and that the promised closure of its nuclear site is easily reversible.