In this editorial, the paper says it hopes the Nobel Prize win by Japanese professor Tasuku Honjo for his work in cancer therapy will provide momentum for more budding research from Japan to be nurtured.

TOKYO (THE YOMIURI SHIMBUN/ASIA NEWS NETWORK) - Success in developing an innovative cure for cancer, a formidable enemy of the human race, has earned international acclaim. The feat deserves to be extolled.

Tasuku Honjo, a distinguished professor at Kyoto University, has been named a winner of this year’s Nobel Prize in Physiology or Medicine.

His discovery involves cancer immunotherapy to treat cancer by harnessing the power of the body’s inherent immunity. Honjo shares the prize with James Allison, a professor at the University of Texas, who has worked to develop this field of study together.

Honjo is the fifth person originally from Japan to be awarded the Nobel Prize in Physiology or Medicine, following Yoshinori Ohsumi, an honorary professor at the Tokyo Institute of Technology, who received the prize two years ago.

Honjo’s accomplishment deserves special mention, as he has not limited himself to basic research, but has even spearheaded efforts to develop Opdivo, a medication that has become disseminated as an epochal drug for cancer treatment.

At a press conference, Honjo spoke of his delight, saying, “I’m glad to be thanked by patients who have recovered. I’d like to continue my research to save many patients in the future, too.” His feat will serve a model for applying research results to practical and clinical treatment.

Although immunity provides a defence against pathogens and other external enemies, it does not sufficiently function to do so against cancer, which is caused by mutations in human cells.

Honjo and Allison explored its cause through research, starting at the genetic level. Then they discovered that cancer cells form protrusions to brake the actions of immune cells to prevent them from attacking cancer cells.

Based on this discovery, they developed a medication that can halt such braking action. The effectiveness of the medicine has been confirmed as tumours disappear in such illnesses as intractable skin, lung and stomach cancer. 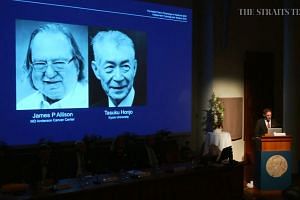 Cancer immunotherapy has become the fourth therapy for the disease, alongside surgery, radiotherapy and chemotherapy using anticancer drugs.

In advanced countries, one in every two persons develop cancer in step with the ageing of the population, and one in every three patients dies of the disease. It is hoped that scientific studies in this field will greatly develop more and more.

The problem is to improve the performance of treatment using cancer immunotherapy and the efficiency of such treatment.

Although this method of treatment has produced remarkable therapeutic effects for 20 to 30 per cent of patients, there are many cases in which the therapy has no effect. Some patients suffer strong side effects due to the removal of immune cells’ braking action. It is also difficult to discern how long a patient should continue to use drugs after the disappearance of tumours.

It is also necessary to curtail fees for the therapy. When Opdivo was introduced in Japan, the use of the drug required more than 30 million yen (S$362,119) annually per patient. With an increase in the types of cancers to which the drug is applied, the price will be lowered to about 10 million yen. However, price level is still difficult to say that the cost is readily affordable.

It is said that Honjo’s research was not initially understood by other scientists and pharmaceutical companies as it was too innovative. He was not able to conduct a clinical test in Japan; he did so in the United States first.

Nurturing the budding research of Japanese origin and making them conducive to practical application — it is hoped that Honjo’s Nobel Prize will provide momentum for this aim.

The Yomiuri Shimbun is a member of The Straits Times media partner Asia News Network, an alliance of 23 news media organisations.