HONG KONG - The chopper finally fell on Hong Kong's iconic roast goose restaurant Yung Kee when a winding up order came into effect on Thursday (Dec 17), putting an end to a five-year family feud in court.

But it may be years before foodies see the last of their favourite fowl dish, as the restaurant may continue to operate - with permission from its liquidators - until the company is formally dissolved.

Yung Kee founder Kam Shui Fai, who died in 2004, left the bulk of the company's shares to his sons Kinsen and Ronald.

The rest of the shares went to other family members. But they soon took sides, giving their shares to the respective brother they supported after a bitter fight over control of the business split the siblings. Kinsen's stake grew to 45 per cent, while Ronald had 55 per cent. 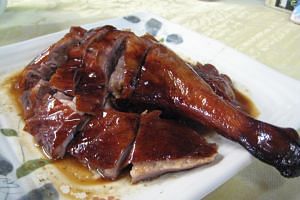 Yung Kee to close? Other roast goose restaurants to try in Hong Kong

In 2010, Kinsen went to court in a bid to force his younger brother to buy his shares for an estimated HK$950 million (S$173 million) or liquidate the company. This was rejected by Ronald, whose children now run the restaurant.

As the liquidation deadline drew near, Ronald offered up to HK$1.1 billion for the shares. But the family of Kinsen, who died of cancer in 2012, believe they are entitled to HK$1.3 billion.

Wednesday was the liquidation deadline set by the Court of Final Appeal in November to resolve the drawn-out family dispute over the 73-year-old establishment. A last-minute bid by Ronald's son, Carrel, to extend the deadline was dismissed by the Chief Justice.

Kinsen's family had until Wednesday midnight to respond positively before Yung Kee would be officially wound up. But there was no word from the family as the clock ticked past 12 midnight.

Kevin, son of Kinsen, later told reporters he is not ruling out buying back the Yung Kee trademark after liquidation is complete, the Apple Daily reported.