HONG KONG (BLOOMBERG) - On a Friday evening in early October, an off-duty Hong Kong police officer grabbed his holstered gun and warned away protesters who surrounded him.

One pulled him into a headlock and soon he was swarmed on the ground. A loud bang reverberated through the street. Hours later, photographs of a protester shot in the thigh did the rounds of social media. Public broadcaster RTHK said someone had been hit by a live bullet.

While idealistic students have played key roles in social and political movements around the world, Hong Kong's teenagers are turning into activists at an unusually young age.

As thousands have taken to Hong Kong's streets this summer, marching through tear gas and baton wielding officers, some of those demonstrating have been students just out of middle school or even still in it.

The death on Friday of a 22-year-old student in an area near a clash between police and protesters threatened to further inflame demonstrations that have become increasingly violent.

Besides the risk of serious injury or death, the teenagers helping fuel the protests also pose a problem for Beijing: They will oversee the transition when the "one country, two systems" framework underpinning Hong Kong's autonomy expires in 2047.

Interviews with three young teens, lawyers and social workers reveal a generation growing politically charged through ideas picked up on social media platforms like Instagram, Facebook and Telegram. They've grown up in this former British colony that allows free flow of information and has a lengthy history of feisty protest movements.

But unlike their peers in the West, they place an added value on these freedoms because of fears they could lose them as Beijing increases its control over their home city.

They don't trust the government, they identify themselves as Hong Kongers rather than Chinese nationals, and they're prepared to keep pushing for more freedoms - putting Asia's financial hub at risk of seeing more violent protest movements for years to come. 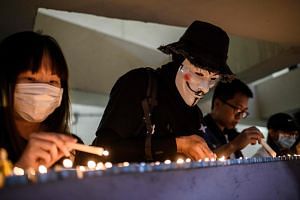 Hundreds gather in Hong Kong to mourn death of undergrad

"For countries with democracy, they take it for granted," said Agnes Chow, 22, who became a social activist as a 15-year-old student only after reading about the government's plans to change the education curriculum to promote nationalism.

"They don't treat it as something special. While to us, it's difficult to gain."

Hong Kong's protests began in June with thousands taking to the streets to oppose a proposed Bill that would have allowed extraditions to mainland China.

While that Bill has since been withdrawn, demonstrators have since widened their demands to include an investigation into police action and election reform.

One 14-year-old student Bloomberg News spoke with said he first joined the protests in mid-June after his exams because of his concerns about the extradition Bill, which would've allowed Hong Kong residents to be tried in courts on China's mainland. His classmates are not as involved, so he often goes alone and keeps abreast of events through social media.

He always keeps his parents informed, he said, only goes to peaceful protests and is home by dinner around 8pm. His mother, who was present, confirmed that.

He envisioned no other home for himself other than this Cantonese speaking island city. He'll stay, he said, until Hong Kong isn't the city he knows - that is until everyone speaks Mandarin, the official language on China's mainland.

Managing such young protesters also complicates policing. In response to a request for comment, the police said they strive to interview children only when a guardian is present. They also "consider each case on its own merits having regards to the individual circumstances" before deciding whether to apply for a care or protection order for underage arrestees, the statement said.

The 14-year-old who was shot in the thigh was arrested for taking part in rioting and assaulting a police officer, although he has since been released on bail. His name has not been made public and he couldn't be reached for this article. After the incident, the police released a statement saying the officer had fired in self defence.

Underage protesters can also be split up from their families. If a court order is granted, they can be sent to foster care for weeks, said Johnny So, a barrister who has represented minors.

Foster-care institutions in Hong Kong often house teenagers with serious family or emotional issues, and some underage protesters aren't used to such an environment, he said.

Recalling one of his clients who was sent to such facility for a month, he said: "She wasn't happy in there and cried while we visited her. She's from a normal family, not that type of problem child."

When the former British colony was handed over to China in 1997, close to half of those between the ages of 18 and 29 considered themselves Hong Kongers, June data from the Hong Kong Public Opinion Research Institute show. The number has now risen to 75 per cent.

Meanwhile, those who viewed themselves as Chinese nationals slumped from 16.5 per cent in 1997 to merely 2.7 per cent. 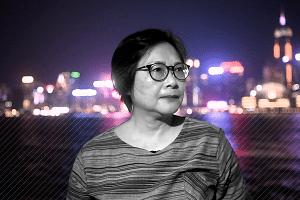 Protests have been part of Hong Kong's collective memory for generations. During peaceful demonstrations some marchers bring their young children along.

The city saw one of its largest rallies in 1989 over the crackdown on student activists at Tiananmen Square in Beijing, and there is a rally each year in Hong Kong to memorialise the event. There are also regular smaller- scale demonstrations around everything from conservation to poverty alleviation.

Young teens have grown up to play bigger roles in the city's political movement. Joshua Wong, one of the most recognisable faces of Hong Kong's protest movement, rose to prominence in 2011 while protesting against a government plan to introduce a national education curriculum when he was just 14 years old. He recently appeared before the US Congress to solicit support for legislation backing Hong Kong's pro-democracy protesters.

Wong said in an interview that he decided to protest against the national education curriculum because it was something that was related to him directly: The students had a stake. He thinks the protesters are becoming younger because they see the Hong Kong government's controls as authoritarian.

"If the government didn't introduce the national education curriculum, I wouldn't start protesting," he said.

On a recent Sunday afternoon, two masked 14-year-olds left a rally in Central that was terminated early by the police. They said they were out on the streets to fight for freedom, but were never at the front lines because they were weak.

As they struggled to figure out the transport to leave the scene, the two stressed that they would continue protesting despite the increasing danger.

"Their physical age is small, but their mental age is very mature," said T Wing Lo, a criminology professor at City University of Hong Kong, who's also been a social worker.

"They can access a lot of information that informs them about social justice. And they see democracy, freedom and rule of law as very important."