Two young pro-independence lawmakers in Hong Kong were effectively barred from taking their seats in the Hong Kong legislature after China announced an interpretation of the city's mini-Constitution on Nov 7.

The move, which is China's fifth interpretation of the Basic Law since the 1997 handover of the former British colony, marks the first time Beijing interpretated the Constitution without a request from the city's authorities or judiciary.

Here's what you should know about the issue:

What is this case about?

Two politicians who advocate independence for Hong Kong - Ms Yau Wai Ching, 25, and Mr Sixtus Leung, 30 - were elected to the city's Legislative Council (Legco) in September. On Oct 12, as they were being sworn in, they deviated from the oath of office by saying "Chee-na" instead of China. Many consider the term a derogatory slur against Chinese people because it was used by the Japanese in World War II. Ms Yau also added a crude epithet.

Legco President Andrew Leung ruled their oaths invalid, preventing them from taking office. Although he had scheduled another session for the pair to be sworn in, he changed his decision on the eve of the session and barred the two from the legislature. 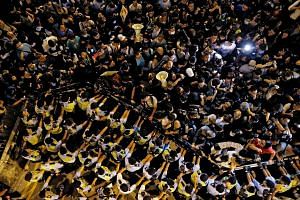 Meantime, Chief Executive Leung Chun Ying mounted an unprecedented legal move to challenge the Legco president's powers to allow the pair to retake their oaths. He argued in court on Nov 3 that the two politicians had declined to take the oath and should be disqualified. But a lawyer representing the Legco president said the issue should be decided by the legislature, not the courts or the executive branch.

What does the Basic Law say?

One provision in the Basic Law says that legislators must "swear allegiance to the Hong Kong Special Administrative Region of the People's Republic of China". There is also a local statute that says any person "who declines or neglects to take an oath duly requested" is disqualified from entering office, or must leave the post if he or she has already done so.

What is Beijing's interpretation of the Basic Law?

The National People's Congress (NPC), or China's Parliament, says the actions of the two lawmakers are deemed to have contravened the legal requirements for public office.

"Those who declare Hong Kong independence not only have no right to run for the legislature and be a lawmaker, they should also be subject to legal responsibilities," said the NPC in an eight-page document detailing its interpretation of Article 104 of the Basic Law.

Mr Li Fei, chairman of the NPC's Basic Law committee, told reporters that the interpretation carries the same legal weight as the mini-Constitution and "bears the highest legal authority".

He also called for all to remember the war atrocities committed by the Japanese in Hong Kong. He criticised the two lawmakers and other pro-independence youth, saying they had no sense of history, and likened them to "traitors who sell out their country".

Why is this interpretation significant?

China watchers say it not only affects the two lawmakers in question but also has implications for the other cases that are being deliberated by the Hong Kong courts.

Dr Tian Feilong, a law expert at Beijing's Beihang University, told The Straits Times that Beijing has taken a much bolder and tougher stance than before. "The central government foresees that the local Hong Kong authorities are powerless to uphold the law, and require specific support from Beijing."

Some say the case has threatened the principle of self-rule in Hong Kong. Although China has promised "a high degree of autonomy" for Hong Kong in a treaty with Britain, there's increasing concern and unhappiness that Beijing has been interfering in the city's affairs and undermining civil liberties.

In the past year, five local booksellers who sold publications critical of Beijing disappeared and later showed up in Chinese custody. Two years ago, hundreds of thousands of protesters blocked main roads in central Hong Kong demanding greater democracy. The Occupy Central protests lasted 79 days. While the protesters failed in their bid, the movement spawned several new parties set up by young people who want greater autonomy and to preserve the city's culture and identity.

What could happen next?

There are likely to be more protests over Beijing's interpretation of the Basic Law.

Given that the two lawmakers will lose their seats, a by-election is expected to be held in three months' time, Hong Kong political analyst Willy Lam said."If another localist activist is allowed to stand, and loses in the by-election, that would set the stage for an even bigger confrontation,'' he warned.