HONG KONG (AFP) - Protest-themed Chinese New Year fairs have sprung up across Hong Kong to raise money and morale for the city's pro-democracy movement, despite stiff resistance from the local authorities and pro-Beijing politicians.

The fairs are an annual staple in the run-up to the new year, which begins on Saturday (Jan 25) and will see millions around the world welcome the Year of the Rat.

In the past, political parties from across the spectrum set up stalls to raise money and awareness of their causes - often with satirical posters and products teasing their rivals.

But the government banned such stalls this year at the 15 official fairs after more than seven months of political unrest.

In response, nearly a dozen independent fairs have been set up across the city, selling merchandise laden with references to the pro-democracy protests.

At a fair on the steep slopes of the city's Sai Ying Pun district, hundreds of shoppers formed long queues.

One stall was giving away cloth bags with Chinese calligraphy ambigrams that use the characters for both "Hong Kong" and "add oil", a popular phrase of encouragement.

At another, a vendor was selling traditional "fai chun" new year greetings that people hang on their doors, blending traditional auspicious wishes with protest slogans and demands.

Many of the shoppers and vendors criticised the government's decision to stop political parties setting up stalls at the official fairs.

"Cutting (them) seems to be one of the measures adopted by the government to punish the non-violent supporters of the protests," said Mr Tam Kwok Sun, 64, who was making fresh prints on T-shirts and bags at the fair in Centre Street. 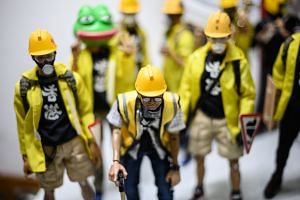 Some of the independent fairs have met opposition, found it difficult to find venues and even had to cancel.

The fair in Sai Ying Pun had its length cut from 100m to 50m by local officials after pro-establishment politicians said it was unsafe.

"They rejected our application after the first meeting of the newly elected council," said Ms Camille Yam, a member of the pro-democracy camp which swept to victory in municipal-level elections back in November.

A fair at a public housing complex in Kwan Chung district was cancelled entirely after the local Housing Authority revoked its approval three days before the opening, co-organiser Janis Fan told AFP.

The decision came after pro-Beijing councillors who lost their seats in November's local elections criticised the fair organisers for "instigating strong political ideologies within communities".

"One day after we were singled out and criticised, the authority revoked its approvals," Ms Fan said.

One of the objections raised by the pro-establishment bloc was the presence of a "pig with political meaning" in posters advertising the fair - a reference to a cartoon pig that has been embraced by protesters as a symbol of their movement because 2019 was the Year of the Pig.

The pig began life as a meme on LIHKG, an online forum that serves as a virtual command centre for the protests, and now features heavily in protest merchandise.

The Housing Authority did not respond to requests for comment.

Another fair in Whampoa district had to move into a restaurant after local authorities refused to let organisers use public land near a pier.

"This is political repression," a stall owner, who gave her first name as Jessica, told AFP as she drew a cartoon hamster on a cloth bag.

But Mr Edward Li, a shopper at the Sai Ying Pun market, said he felt the new year fairs were bringing people together despite the difficulties some organisers were facing.

"The atmosphere is great," he told AFP. "I feel everyone is connected here, maybe it's because of what happened in the past months, everyone comes here because we share the same beliefs."

"I feel that this Chinese New Year, the sense of being a Hong Konger has strengthened."