HONG KONG (BLOOMBERG) - It's been a long, strange road for Hong Kong's legislation in allowing extraditions with China.

What started with a gruesome murder during a local couple's Valentine's Day holiday in Taiwan has become the latest flash point in the values clash between Beijing and the West.

The legislation would give the Asian financial centre power to enter one-time agreements with places like Taiwan to transfer criminal suspects, such as the Hong Kong man who escaped prosecution in the Valentine's Day murder case by returning home.

But the inclusion of China, whose justice system remains separate from Hong Kong's under a 1984 handover agreement with Britain, prompted hundreds of thousands of opponents to protest and attempt to stop the Bill's passage.

A local teenager is killed while vacationing with her boyfriend in Taiwan. She's beaten, strangled, stuffed in a suitcase and ultimately discarded near a train station. The boyfriend, a Hong Kong resident, admits to the murder after returning home. But the authorities can't extradite him to the island to stand trial, and instead prosecute him for the lesser charge of money laundering.

Hong Kong Chief Executive Carrie Lam's government proposes legal changes that would ease the transfer of criminal suspects between jurisdictions with which it lacks formal extradition agreements, including mainland China. The move triggers concern among activists, lawyers and the business community, where many warn that exposing Hong Kong residents to China's legal system could risk the city's autonomy and status as a financial hub. 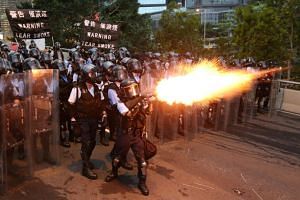 A delegation of US lawmakers, including co-chairmen of the US-China Working Group, Representatives Darin LaHood, an Illinois Republican, and Rick Larsen, a Washington Democrat, visits and meets pro-democracy lawmakers. US Consul-General Kurt Tong says the Bill could have "some impact" on Hong Kong's special trading status.

Hong Kong scales back the proposal, removing nine categories of financial crimes, including bankruptcy, securities and futures, and intellectual property. But the concessions do little to silence outcry: The law still covers offences including murder, polygamy and robbery, which are all eligible for at least a three-year jail sentence under existing laws.

The government introduces its proposed Bill to the Legislative Council, with the goal of passing the proposal before the session ends in July.

Mr Zhang Xiaoming, the director of the Chinese office responsible for Hong Kong, backs the legislation, saying it will prevent the city from becoming a haven for fugitives. The Chinese Foreign Ministry also says it's necessary. The support comes after Britain, which handed the territory back to China in 1997, formally expresses its concerns to Hong Kong's government. Others, including the American Chamber of Commerce in Hong Kong, also air reservations.

APRIL 28: ON THE DEFENSIVE

Mrs Lam pledges to press ahead after some of the city's largest mass protests since the 2014 pro-democracy Occupy movement. Organisers say as many as 130,000 demonstrators marched to the Legislative Council building, many of them calling for Mrs Lam's resignation. Police, however, say less than 23,000 attended.

A Hong Kong court convicts the Valentine's Day murder suspect of money laundering and sentences him to 29 months in prison, but his potential early release in October fuels government calls to pass the extradition Bill.

MAY 17: POMPEO WEIGHS IN

US Secretary of State Michael Pompeo speaks out against the Bill, saying its passage would threaten Hong Kong's rule of law. He also meets pro-democracy advocates from Hong Kong for a discussion on the state of its autonomy and Beijing's efforts to extend its reach.

Hong Kong announces further amendments, saying it will raise the proposed extradition limit to crimes that carry a maximum sentence of seven years in prison. Raising that threshold removes other categories of crime from the proposed law, including criminal intimidation, giving firearms to unlicensed persons and some sexual crimes.

Hundreds of thousands of people march through central Hong Kong in opposition to the Bill, many chanting for Mrs Lam to step down. Organisers say more than one million people, out of a population of 7.5 million, turned out at the demonstration's peak, while police estimate the crowd to be 240,000.

The Legislative Council schedules debates, amid calls for further protests and unprecedented strikes. Mrs Lam, with a fresh statement of support from Beijing, says the Bill provides enough human rights protections and warns that delaying its passage could be more divisive. Opponents urge a general strike next Monday, days before the legislature plans to finish debate on June 20.

Clashes erupt on the streets of the city’s central financial district, with police using batons, tear gas and rubber bullets on demonstrators trying to disrupt the legislature’s planned debate of the Bill. Lawmakers postponed the session until at least the following week.

JUNE 13: CALLS FOR LAM TO STEP DOWN

More than 200 members of the Chief Executive Election Committee call on Mrs Lam to step down and withdraw the Bill. They say that Mrs Lam should resign to assume responsibility for the violent enforcement against protesters who clashed with the police during demonstrations. Debate on the Bill is postponed for a second day, as a sense of calm slowly returns to the city.

Debate on the Bill is delayed yet again as opponents aim for another massive rally on June 16. Support for Mrs Lam’s stance on the issue also seems to be wavering, with a number of her allies urging her to shelve the Bill.

Mrs Lam says at a press conference that the government will temporarily suspend the highly divisive extradition law, and tries to have better communication with the people, following massive protests this week that ended in violence and injuries.