Chief Executive Carrie Lam on Wednesday (Oct 16) unveiled more than 220 initiatives in housing, land supply and livelihood support, in a recognition that economic policy has a role to play in alleviating some of the city's frustrations. She also acknowledged that Hong Kong entered a recession in the third quarter and warned of an unprecedented economic challenge.

That's a start, though observers say the longstanding growth model - as a low-tax, low-regulation entrepot for finance and trade - has become an element in the political unrest, rather than the main solution.

Huge income inequality, markets controlled by insiders and a spiralling cost of living - especially of housing - are by now hallmarks of Hong Kong's brand of capitalism, alongside the "world's freest economy" label perennially awarded by The Heritage Foundation, a conservative-leaning US policy group.

From using the city's fiscal firepower to breaking the dominance of conglomerates and raising the standard of public facilities, there exists a range of proposals from economists and other experts for a way forward.

In some areas, the government is already moving ahead. In others, a fundamental shift - and the political consensus to make it - is required.

USE RESERVES TO TACKLE HOUSING

Many in the city question the political will of Hong Kong's government officials to take bold, aggressive action in a range of policy areas. This criticism often arises in relation to the city's HK$1.17 trillion (S$204 billion) fiscal reserve, which some contend has grown steadily for years while the city's problems were allowed to fester. 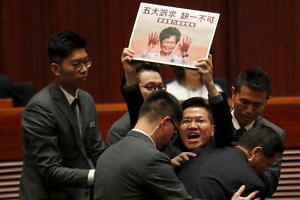 A shake-up of the property market is uniformly listed by observers as the first priority.

The cost of a typical dwelling represents almost 21 years of an average family's income in 2018, according to Demographia, a consultancy, and waiting times for public housing stretch to half a decade.

Indeed, that was the thrust of the announcement in Mrs Lam's Wednesday address to purchase 700 hectares of land in the New Territories, though doubts remain as to whether that will make much of an impact on housing affordability.

Associate professor Ming Sing, from the division of social science at the Hong Kong University of Science and Technology, maintains that the government should shelve the HK$624 billion Lantau Island reclamation project.

The massive effort to create islands adjacent to Hong Kong harbour is expected to take decades to complete. Land in the New Territories would be less expensive and faster to develop and could address the needs of citizens sooner.

One of the potential reasons the government has generally chosen to maintain the status quo is because of the outsize influence of the business elite in the city. That wealth is overwhelmingly concentrated in the hands of a small number of family-run property developers and conglomerates spanning multiple sectors ranging from utilities to supermarkets and telecommunications providers.

As a result, decisions by the government are not necessarily made with the best interests of the wider population in mind, especially in areas like housing. That needs to change before more substantive shifts can be realised, said Dr Donald Low, senior lecturer and professor of practice at the Institute of Public Policy with Hong Kong University of Science and Technology. The low-tax policy, prized as an example of the city's business-friendly attitude, is seen as being at the root of much social tension.

Property developers New World Development and Henderson Land Development have announced plans to provide or lend land for public use, a "proactive act of shouldering a share of social responsibility", Mrs Lam said in her address.

Levying taxes on empty apartment units that have been built yet remain unsold as a bid to artificially suppress supply is an approach that has also been floated by the government, Prof Sing said. He advocates raising taxes on corporations and the wealthy, and then redistributing the wealth to social enterprises.

Long viewed as the gateway to doing business in Asia, Hong Kong's status has slowly eroded over the past decade with the emergence of other business hubs across the region, challenging the city's competitiveness on multiple fronts.

Once considered among the world's most important container ports, Hong Kong has lost ground to the likes of Guangzhou and Busan. And upstart Shenzhen has transformed itself into China's technology centre within a matter of decades while Hong Kong has invested billions in a fruitless attempt to effectively compete in that space.

The city's economy must reduce its dependence on mainland China by diversifying into other Asian markets such as Vietnam, the Philippines, Thailand and Malaysia, Prof Sing said.

"Further economic integration with China will amount to greater political control by China," he said. "And in the long run, that can stifle and undermine their economic competitiveness."

Instead of trying to compete with Shenzhen to become a tech hub, Hong Kong should focus on its advantages in medical care to attract business from abroad. Mrs Lam is missing an opportunity here, and investment in this area will also help address the needs of an ageing population, according to economist Iris Pang at ING Bank NV in Hong Kong.

"Investments in areas such as building hospitals and training doctors take years and need to be addressed as soon as possible," she said.

Hong Kong is dogged by gaping levels of poverty and inequality. While the city has one of the world's heaviest concentrations of billionaires, almost one in five residents lives below the poverty level, according to a government report from 2017.

This is also apparent in social welfare spending. The average country in the Organisation for Economic Cooperation and Development (OECD) spends the equivalent of just over 20 per cent of its GDP on social expenditures alone, with countries including France and Finland spending north of 30 per cent, according to OECD data.

By contrast, Hong Kong's entire city budget equals about 22 per cent of the city's GDP, with spending on education, social welfare and health accounting for just less than half of that total.

"Hong Kong is among the most unequal societies in the world and the rich in Hong Kong seem to get richer every year and inequality keeps on increasing," said Mr David Gordon, director of the Bristol Poverty Institute and the Townsend Centre for International Poverty Research at the University of Bristol.

"Instituting universal pensions, healthcare and child benefits will go a long way towards benefiting the least fortunate, including the young and elderly."

Whatever the outcome of the stand-off in Hong Kong between protesters seeking to preserve their political freedoms and the government controlled by communist China, these issues will be present, and observers say there must be a mechanism in which city residents can help arrive at solutions.

The disruption of Mrs Lam's policy address on Wednesday by pro-democracy lawmakers - which required her to give it via video - highlights the difficulty in achieving policy consensus in Hong Kong, especially amid a political crisis.

"The Chief Executive says we will listen deeply and consult widely, but it needs to go far beyond that," said Dr Low. "You need mechanisms to include citizens in government decision-making."