HONG KONG (REUTERS) - Some Hong Kong anti-government protesters who remained inside a university tried to flee through the sewers, where one student said she saw snakes, an escape route that firemen sought to close on Wednesday (Nov 20) by blocking the trapdoor into the system.

Reuters witnesses said fewer than 100 protesters remained inside the Hong Kong Polytechnic University (PolyU), ringfenced 24 hours a day by riot police and barricades, after more than 1,000 were arrested since late on Monday.

Some surrendered while others were grabbed in escape attempts that included trying to clamber down ropes to waiting motorbikes.

Some protesters, wearing waterproof boots and carrying torches, resurfaced inside the campus on Wednesday after unsuccessfully probing the sewers - where fast-rising water levels are also a hazard - for a way out during the night.

It was unclear if any had managed to escape that way.

Firefighters, whom the students let onto the campus, were in place to stop any further such attempts to flee, blocking the only entrance into the sewer system.

"The sewer was very smelly, with many cockroaches, many snakes. Every step was very, very painful," said Bowie, 23, a student at Hong Kong University who was forced to turn back.

"And the flow of water was strong. Hong Kong is a very developed city. I'd never thought that one day I would need to hide in a sewer or escape through sewers to survive... The most unforgettable feeling is the fear when I was inside," Bowie said.

She added that she and her friend were in the dirty water for about an hour, only to find that they were no closer to escape. 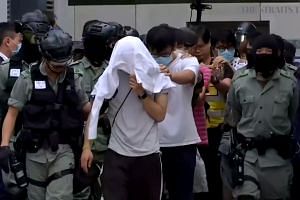 "When we reached the end, we found we were still in the (university)," she said.

The university on the Kowloon peninsula is the last of five that protesters had occupied to use as bases from which to disrupt the city over the past 10 days, blocking the central Cross-Harbour Tunnel outside and other arteries.

Police searched for any escapees during the night with spotlights, without resorting to the tear gas and rubber bullets, that marked clashes in recent days.

Hong Kong leader Carrie Lam has called for a humane end to a siege that saw the most intense clashes since the protests escalated more than five months ago.

Police have made more than 5,000 arrests in connection with the protests since June.