HONG KONG (REUTERS) - Researchers at a Hong Kong university say they have developed an anti-viral coating which could provide 90 days of "significant" protection against bacteria and viruses such as the one causing Covid-19.

The coating, called MAP-1, took 10 years to develop and can be sprayed on surfaces that are frequently used by the public, such as lift buttons and handrails, researchers at the Hong Kong University of Science and Technology (HKUST) say.

"These places are frequently touched, and, at the same time, serve as a very effective medium for transmission of diseases," said HKUST Adjunct Professor Joseph Kwan, one of the chief researchers in the team that developed the product.

The coating that forms after spraying has millions of nano-capsules containing disinfectants, which Prof Kwan says remain effective in killing bacteria, viruses and spores even after the coating has dried.

Unlike common disinfecting methods such as diluted bleach and alcohol, MAP-1 is further boosted by heat-sensitive polymers that encapsulate and release disinfectants upon human contact, Prof Kwan said.

It is non-toxic and safe for skin and the environment, the researchers say.

Following clinical tests this year at a Hong Kong hospital and a home for the elderly, the coating has been made available for commercial purchase by Germagic, a unit of the university's industrial partner, Chiaphua Industries.

The coating was approved for official and mass consumer use in February, and will hit Hong Kong stores next month.

With help from a local charity, the non-toxic coating has already been sprayed around the homes of more than a thousand low-income families in the city.

"I feel like it has strengthened our protection against the virus," said Ms Law Ha Yu, a mother of two who lives in a 110-square-foot subdivided unit that was recently sprayed with the coating.

The researchers said shopping malls, schools and sport training facilities in the city have adopted the coating. 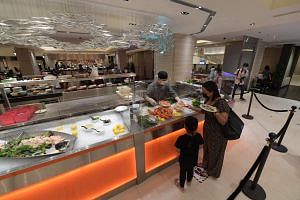