Tens of thousands of demonstrators stormed main roads next to the government office, protesting against local officials' efforts to push ahead with a legislation that would allow people to be sent to mainland China for trial.

The Hang Seng Index fell 1.7 per cent at the close, with local property developers among the biggest losers.

The sell-off comes amid broader concerns about the global economy, a key driver of growth in the former British colony, as Sino-US trade tensions worsen, and expectations about a United States Federal Reserve rate cut in the months ahead.

Mr Ben Kwong, director of research at KGI, said local stocks were due to give up some of their gains after a few strong sessions, and that the protest was an excuse for the market to adjust.

"This is a normal initial reaction, when you have social unrest or tension, given that we've had a few years of relative calm," he said.

But it also sent financial institutions scrambling for liquid assets, with interbank interest rates in the city shooting up across the curve. The one-month interbank borrowing cost, known as Hong Kong Interbank Offered Rate (Hibor), rose 29 basis points to about 2.42 per cent, the highest since 2008. The Hong Kong dollar also strengthened as much as much as 0.26 per cent, the largest gain in seven months. 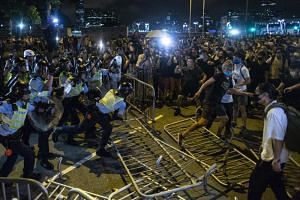 The Hong Kong dollar is pegged to the greenback at a range of 7.75-7.85. Official interest rates in Hong Kong usually move in lockstep with the Fed.

Interest rates are usually higher and liquidity tight during the mid-year dividend season and when there are large listings in the local stock market.

But two forex analysts based in the city said the protests added pressure, heightening concerns about capital outflows.

"This time around, people are really concerned about political risks, worried about foreign capital leaving Hong Kong," said one of the analysts, who asked not to be named.

In September 2014, when the 79-day "Occupy" protests broke out, the local currency and stock market weakened initially but rebounded in the following month, while the Hibor curve sat below 1 per cent.

Back then, however, global growth was strong enough for the Fed to hike rates and move away from interest rates that were near zero per cent. This year, markets expect the Fed to cut rates amid concerns over growth and intensifying trade tensions.

"The impact was short lived in the past. But now we're in bear market. Sentiment was not good before this," he said.

But the rating could come under review if there is "a move towards greater alignment of institutional and regulatory frameworks that diminish the autonomy of Hong Kong with respect to the factors that support its higher credit rating relative to mainland China", the agency said, commenting on the extradition Bill.