HONG KONG - At least 72 people were injured and taken to hospital during clashes between police and protesters on Wednesday (June 12) over a contentious extradition Bill, said Hong Kong authorities.

By night time, police officers were still in a stand-off with protesters on Queensway, not far from Admiralty Station, even though most of the protestors had dispersed following the use of tear gas and rubber bullets.

Earlier, police fired rubber bullets at protesters after they declared a "riot" as - for the second time in days - clashes broke out between police and protesters demonstrating against the controversial extradition Bill.

Chief Executive Carrie Lam condemned the violence in a strongly-worded speech that was televised on Wednesday evening, accusing protesters of "openly orchestrating a riot".

Hours after lawmakers delayed a planned debate on the Bill, police fired pepper spray and tear gas at protesters who have parked themselves outside the government headquarters in Admiralty and blocked key downtown routes to show their opposition to the Bill.

They threw water bottles, traffic cones and other items at riot police and chanted slogans, vowing to stay put until the government withdraws the legislation that would allow extraditions to China.

"We had no choice but to use weapons to stop these protesters from barging at our defence lines," Police Commissioner Stephen Lo Wai-chung said, speaking in Cantonese.

The top police official, however, brushed aside suggestions that a curfew would be imposed, local radio station RTHK reported.

Still, opposition leaders celebrated the postponement of the meeting during which the Bill was scheduled to be read, a Bloomberg report said. Details of another meeting will be made once it is decided.

“You guys made a miracle today,” Labour Party politician Fernando Cheung shouted to the crowd. “The meeting is delayed because you stood out today. But we still need more people coming out today." 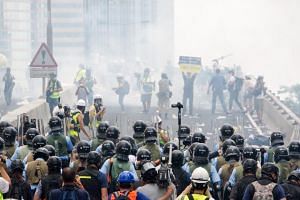 Pro-democracy lawmaker Claudia Mo similarly said: “Didn’t we say at the end of the Umbrella movement we would be back?” referring to the name often used for the “Occupy” demonstrations in 2014, whose trademark was the yellow umbrella. “Now we are back!” she said as supporters echoed her words.

“Any actions that harm Hong Kong’s prosperity and stability are opposed by mainstream public opinion in Hong Kong,” Mr Geng said at a regular briefing.

Asked about rumours that more Chinese security forces were going to be sent to Hong Kong, Mr Geng dismissed it as “fake news”.

The rally on Wednesday was within sight of the Hong Kong garrison of China’s People’s Liberation Army, whose presence in the city has been one of the most sensitive elements of the 1997 handover.

The protesters ignored a call from Chief Secretary Matthew Cheung to leave as soon as possible so traffic could resume. In a one-and-a-half minute long video clip, Mr Cheung urged people to stay calm and restrained, disperse as quickly as possible and not do anything illegal.

The appeal from the second-most senior government official was the first response from the administration after the protesters gathered outside the Legislative Council on Tuesday night.

He said the government had on three occasions added extra human rights safeguards to the extradition Bill after listening to the public's views.

Earlier, in an advisory, the Hong Kong authorities asked civil servants not to head for the government headquarters, as its entrances were blocked.

In scenes resembling the 2014 pro-democracy "umbrella" protests, young protesters, many dressed in black, wearing masks and carrying umbrellas, dragged metal barricades to the roads leading to the government complex, with the aim of cutting off access to the building. Others spilled onto Harcourt Road and Lung Wo Road, disrupting traffic.

Shortly after 9am, protesters started clapping and chanting “go Hong Kong, go”, “cancel the meeting” and “(we) oppose the Bill”.

Local reports said police in riot gear used pepper spray on the crowds. By about 9.45am, the police started dispersing the crowd. Police issued a red notice to warn protesters not to misbehave or they will use force.

A government notice issued at 11am said the meeting to debate the Bill has been rescheduled “to a later time”. But the protest organisers said there could still be a meeting, and asked protesters to protect themselves.

The authorities also asked the train operator to skip Admiralty station on the Island (blue) and Tsuen Wan (red) lines due to the massive crowd.

The government had in February proposed changes to the extradition law that will allow Hong Kong to extradite people to the mainland to stand trial.

Critics in various sectors, including legal, politics and business communities, argued that the law might be used for political persecution and that fugitives might not receive a fair trial in the mainland.

While the government has explained that there are safeguards to prevent this, those who oppose the Bill say it threatens Hong Kong's rule of law and undermines the "one country, two systems" principle.

Under the principle, Hong Kong is guaranteed a high degree of autonomy and freedoms for 50 years from 1997, the year when the British handed the former colony back to China.

Observers have noted growing concerns that Beijing is tightening its grip on Hong Kong, and the extradition Bill is seen by some as the last straw.

Wednesday morning's rally came after there were fresh calls for protests from opposition lawmakers who urged the public to join their cause and camp outside the Legislative Council complex in a peaceful demonstration until next Thursday, when the Bill is expected to come to a vote.

On Tuesday, death threats were made against the family of Mrs Lam after she refused to back down.

The developments followed Sunday's protest - the biggest in the territory since the handover in 1997. Police estimated a 240,000-strong crowd at its peak, far below the more than one million figure put forward by organisers.

The largely peaceful protest turned violent on Sunday night when about 350 protesters stormed the LegCo and clashed with police. Eight police officers and some protesters were injured. At least 19 people were arrested.