HONG KONG (WASHINGTON POST) - One of the tools used by both protesters and police on the streets of Hong Kong are high-powered lasers and blinding lights, shone through thick clouds of tear gas to confuse each other and as an additional tool to conceal their identities and activities.

Protesters armed themselves with lasers early on in their nearly three-month-old movement, pointing them into windows during a protest outside the police headquarters to distract and annoy officers.

In recent weeks, the demonstrators have used the lasers to keep pace with a widening dragnet by the authorities.

Frontline protesters - who always cover their faces and sometimes even the brands of their shoes to prevent identification - have fixed the strong beams at surveillance cameras to stop themselves from being easily spotted and identified.

The lasers are one of the identity-masking efforts by those protesting that reflects widespread suspicion that the lines between China and Hong Kong no longer exist.

The protests were sparked by fears of a widely unpopular Bill that would allow extraditions to China, which many believed would end a crucial firewall between the two territories legal systems.

The movement has since grown into something that encompasses wider fears that Beijing exerts ultimate control over Hong Kong. On the streets, there is widespread suspicion that policing efforts from the mainland, including high-tech surveillance, have been adopted by Hong Kong's police.

But it is not just protesters relying on dizzying, high-powered lights for help. 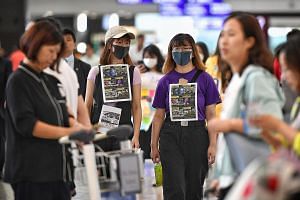 Widespread use of tech changes nature of Hong Kong protests

While riot police have used tear gas, rubber bullets and pepper spray on protesters in recent weeks, they, too, are using lights and beams as tools to easily identify protesters and confuse them - even after tear gas has turned the streets foggy.

Some officers pointed high powered beams at television crews and photographers trying to capture the action as it unfolded - leading to questions about their commitment to the press' freedom to openly cover the clashes without interference.

On social media, interest in the use of lasers during the political upheaval in Hong Kong has been widespread. Hypnotic videos showing the bright lights streaming through walls of thick smoke have been viewed hundreds of thousands of times on Twitter - with many likening the action to scenes straight from a science fiction movie.

The protest movement swelled in early June with an estimated one million people taking to the streets to protest against the extradition Bill. The Bill has been suspended but not withdrawn by lawmakers, who have also declined to meet other protester demands such as independently investigating police use of force.

At the heart of the Hong Kong protests is the belief that Beijing - which was handed back control of the former British colony more than 20 years ago - is increasingly stripping Hong Kong of its cherished freedoms and autonomy.

More than 100 people have been charged in connection with the political unrest, including more than 40 who have faced riot charges that carry up to 10 years in prison if they are convicted.

After weeks of massive sustained protests, the demonstrations show no sign of abating. A rally by civil servants has been planned for Friday evening at Chater Garden in Central. A protest march in Mongkok has been planned for Saturday but police have rejected the application for the march - they have granted permission for a rally instead, according to local broadcaster TVB.

Trade unions and other groups are also advocating for a general strike on Monday.