HONG KONG (NYTIMES) - As a television journalist was trying to record video of a protest in Hong Kong last week, the protest suddenly became about him - and his employer.

Surrounding him, the young demonstrators waved signs in front of his camera that read "Change channels!"

They also held up bottles of Pocari Sweat, a sports drink that has become an unlikely symbol of disdain for his news station, Television Broadcasts, better known as TVB.

TVB, Hong Kong's dominant broadcaster, has been singled out for scorn by protesters, who accuse it of a pro-Beijing bias in its coverage of the political crisis roiling this semi-autonomous Chinese region.

Analysts say TVB's reporting has largely focused on how the protests have disrupted Hong Kong's famed efficiency, while playing down the political frustrations that have driven people to the streets in large numbers.

The tension between the demonstrators and the station, whose broadcasts reach about 70 per cent of Hong Kong's population, touches on concerns that the city's status as a regional bastion for press freedom is being steadily undermined by the Communist Party in China, where media controls are strict.

"It is a notorious television station, and it always doesn't show comprehensive facts," said Cheuk Ka-ho, 21, a university student who is active in the protest movement.

"We feel that over the years it has gotten worse as it keeps getting closer to China."

The protests began in early June, when hundreds of thousands marched against legislation that would allow extradition to the Chinese mainland.

Hong Kong's leader, Carrie Lam, has since suspended the Bill indefinitely, but protesters, including on Sunday (July 14), have continued to demand its full withdrawal, Mrs Lam's resignation and an independent inquiry into what they consider a brutal police response to some of the protests.

On July 1, some demonstrators escalated the conflict by storming, vandalising and briefly occupying the Hong Kong Legislature. 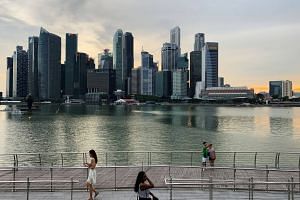 In Pictures: Hong Kong riot police clash with protesters inside a shopping mall

In TVB, protesters have found another front in their battle for Hong Kong's future. They have organised boycotts of the network on social media and lobbied companies to withdraw advertisements from it.

The confrontation on Wednesday, when the TVB journalist was surrounded, was not an isolated incident. Last month, protesters heckled another TVB video journalist, unfurling umbrellas to block his camera and chanting, "TVB news, selling out the people of Hong Kong!"

The protesters accuse the broadcaster, which has a virtual monopoly on free-to-air TV rights in Hong Kong, and a senior executive who was once a top Communist Party official in Shanghai of deliberately marginalising their movement, a charge that TVB rejects.

A Facebook group calling for boycotts of TVB has drawn more than 30,000 followers, and a petition criticising the station has collected 100,000 signatures.

Last week, the maker of Pocari Sweat, a Japanese sports drink popular in Hong Kong, pulled its advertising from TVB.

TVB has defended its coverage as accurate and impartial and accused protesters of threatening its advertising clients.

"Pocari Sweat's comments are designed to please protesters, which equals to bowing to violence," the broadcaster said to a Chinese nationalist tabloid, Global Times, in comments that TVB verified as accurate.

A spokeswoman for TVB declined an interview request. But in a statement last month, the station said it was deeply regrettable that TVB reporters had been prevented from doing their jobs.

Hong Kong's media landscape has become something of a battleground for the social divisions exposed by the political crisis, which could widen as the mass protests continue.

On one side is, essentially, TVB's core demographic: older, conservative Hong Kong residents, who tend to sympathise with police and see the protesters as troublemakers. At a rally in support of the police in late June, some demonstrators assaulted journalists from other local news outlets.

On the other side is a younger group, generally supportive of the protest movement and the pro-democracy politicians who are a minority in the local Legislature. For them, TVB's coverage confirms long-standing fears about Beijing's growing influence over local affairs. 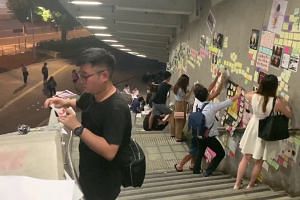 Some critics refer to TVB as "CCTV-B", a mocking reference to China Central Television, Beijing's main broadcaster of domestic propaganda. They point to TVB's vice-chairman, Li Ruigang, a media mogul from mainland China and one-time senior Communist Party official in Shanghai, as evidence of Beijing's sway over the station. Li's company, China Media Capital Group, did not respond to a request for comment, but he has previously rejected such suggestions.

The Hong Kong Journalists Association reported last year that mainland Chinese interests had direct control over, or stakes in, nine of Hong Kong's 26 mainstream media companies, including TVB, up from eight a year earlier.

"Even though ownership is not concentrated in just a few hands, most of them have the same boss: the Communist Party," Allan Au, a former TVB journalist who is now a media studies expert at the Chinese University of Hong Kong, said of the city's pro-establishment media barons.

Ever since Britain returned Hong Kong to Chinese control in 1997, under a formula known as "one country, two systems" that promised a high degree of autonomy from Beijing, the city has distinguished itself from the mainland partly by nurturing the independence of its institutions, including the news media.

While the encroachment of Chinese interests has raised concerns, Hong Kong's media landscape, to be sure, is still relatively free. Its journalists are among Asia's most combative, known to shout sharply worded questions at top city officials. Journalist groups have publicly opposed the extradition Bill and accused the police of using excessive force against reporters who were covering protests.

TVB, for its part, has been less overtly antagonistic towards the protest movement than the city's two pro-Beijing newspapers, Wen Wei Po and Ta Kung Pao. But compared to news outlets with a pro-democracy bent, like the newspaper Apple Daily and the online platform Stand News, it has generally been sceptical of the protesters.

The network "focuses very much on disruptive behaviour rather than on what they asked for, what they really want and what's behind that motivation," said Gary Tang, a media studies expert at Hang Seng University in Hong Kong, referring to the protesters.

Critics note that TVB was the television outlet Mrs Lam chose for an interview last month in which she compared dealing with the protesters to her own experience as a mother with a willful child - an analogy that enraged many of the demonstrators.

On July 2, when TVB covered the aftermath of the storming of the Legislature, it focused on the damage to the building and, unlike other news outlets, barely discussed the protesters' demands.

Mr Au said TVB's closeness to mainland China was evident in the amount of airtime it devoted to reports about, for instance, President Xi Jinping's Belt and Road Initiative of international trade and infrastructure links, at the expense of other types of reporting.

"This is by design: The serious reporters don't have enough resources and time to devote to serious journalism," Mr Au said. "This is what I call 'structural censorship' that confines the content without explicit censorship."

Privately, some of the network's reporters and former staff members say they have felt caught in the middle. They are sympathetic to the protesters but resent being targeted over coverage decisions they say were made by their superiors.

"But these reporters and cameramen think: 'First, I'm on your side, and second, even if I'm not, I'm just doing my work in a professional manner.'" "They would think: 'This is not my fault, so why are you targeting me?'" he said.