HONG KONG (AFP) - As Hong Kong buckles under increasingly violent clashes between protesters and police in a deepening political crisis, hundreds gathered at the harbourfront on Wednesday night (Aug 7) for a markedly different kind of protest: a laser show.

Both police and protesters have used intense beams of light against each other, turning often violent episodes into surreal scenes fit for a disco or science fiction.

Demonstrators have aimed lasers towards riot police, irritating them by flashing the lights at their faces as well as their surveillance cameras to counter facial recognition.

Police also used the lights to befuddle and identify protesters, and have flashed strong lights at journalists, who accuse them of obstructing their reporting.

On Tuesday, a student was arrested for possession of an "offensive weapon" after he was found carrying 10 laser pointers, sparking a late-night protest outside a police station which officers dispersed with tear gas.

In response, Hong Kongers initiated a so-called laser show at the harbourfront space museum, euphemistically inviting others to "stargaze" together - which laser pointers can also be used for.

Protesters aimed their laser pens at the dome-shaped museum, which closed early in anticipation of the protest, turning its facade and nearby trees into dizzying, frenetically dancing lights of green, purple and red as the crowds erupted into cheers. 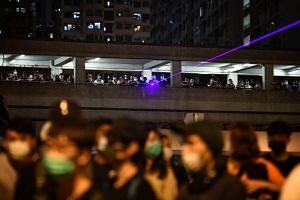 Beijing warns those behind HK protests not to play with fire

"Reclaim Hong Kong, revolution of our times!" chanted the euphoric crowds, at an hour coinciding with a nightly laser and light show sponsored by the government, also at the harbour.

"I'm so angry, the student was just buying (laser) pens. How can the police arrest him without other evidence or information?" said a 28-year-old designer surnamed Lai.

"We are doing this to tell others that possessing a pen doesn't mean having an offensive weapon, it has other purposes," she said, adding the shop proprietor would also have been arrested if he were selling actual weapons.

Many cars honked in support as they drove by the gathering.

"Catch fire! Catch fire!" many also jeered, mocking a police demonstration earlier in the day seeking to justify the arrest by showing how a laser pointer may induce smoke on paper.

A 33-year-old man surnamed Szeto who joined the protest said the laser beams weren't deployed by protesters to attack others, but "to protect themselves".

Police on Wednesday condemned protesters' use of "easily invasive laser guns" to target officers, saying the beams have become "stronger and stronger, and their colours are more and more diverse" throughout the protest movement.

"Even if the laser is not strong enough to cause injury, strong light exposure can cause flash blindness," he said, adding that laser injuries to the eyes is "mainly at the retina".

But journalists have also hit out at police for obstructing press freedom with the beams.

"Police have continued to obstruct reporting by aiming high beam lights at cameras," the Hong Kong Journalists' Association said in a statement on Tuesday.