HONG KONG (BLOOMBERG) - Hong Kong protesters are debating whether to lower the temperature as the battered financial centre prepares for another weekend of tear gas and petrol bombs.

Worried that violence and destructive tactics risk alienating more moderate supporters, some activists have urged others to scale back vandalism that has shut shops, banks and train stations across the city.

Their concerns include giving Chief Executive Carrie Lam a reason to delay local elections next month or discouraging United States lawmakers from passing a Bill to support the protest movement.

One post widely circulated on LIHKG - a Reddit-like forum popular with Hong Kong's young people - warned that further violence risked creating internal splits within the broader pro-democracy movement, which has vigorously discussed the merits of peaceful versus more radical and disruptive actions.

"The general public, including foreigners, will think the violence is escalating to the point of being indiscriminate," the user wrote in a post that garnered more than 3,000 "upvotes", putting it among the most popular posts that day.

Tens of thousands of people returned to Hong Kong's streets a week ago after Mrs Lam invoked a rarely used emergency law to ban them from wearing masks following the first shooting of a protester during police scuffles days earlier.

The result was the most destructive weekend since the movement began over four months ago in opposition to now-withdrawn legislation that would've allowed extradition to mainland China.

The rail operator MTR Corp, who demonstrators accuse of colluding with police and stifling their movements, was forced to shut almost its entire network last Friday and Saturday (Oct 4 and 5), and continues to close early for repairs.

So far, the movement has enjoyed resilient support in the former British colony as it expanded to include calls for greater democracy. But recent episodes, including protesters ambushing police, throwing Molotov cocktails at officers, beating a taxi driver and punching a JPMorgan Chase & Co employee from mainland China have tested the public's tolerance.

"At the moment, the balance still tips in favour of the protesters because of the various misdeeds and brutality on the part of the police, but the balance may turn," said Mr Joseph Cheng, a retired political science professor and pro-democracy activist. "The coming week will be quite critical." 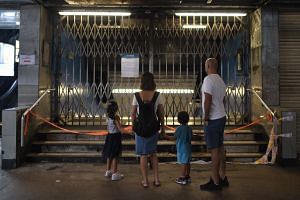 Since protests erupted on China's National Day on Oct 1, police have arrested some 500 people, including 77 for violating the mask ban, and fired almost 2,000 rounds of tear gas. Dozens of people have have been injured, including two teenage protesters who were shot during fights with police.

In online forums, some protesters circulated a public apology for attacks on branches of Shanghai Commercial Bank, which some had mistook for a state-owned Chinese financial institution. The Hong Kong Association of Banks said that 10 per cent of the city's ATMs were damaged last weekend.

However, the view that vandalism should be reduced isn't shared by all.

On Thursday, a group of protesters who earlier disrupted transport links to the airport published a plan on LIHKG to pressure commercial establishments on Sunday, including a colour-coded guide to which establishments should be boycotted or vandalised based on their level of support for the authorities.

'I WOULD TOLERATE ALL THE VANDALISM'

One frequent protester with the surname Yip told Bloomberg News that he was angered at how some businesses "stand with the government instead of the citizens".

"I would tolerate all the vandalism, even though it created troubles for me," Yip said.

Some worry the violence could sap international support, especially as the US Congress considers legislation that would require annual reviews of Hong Kong's special trading status.

The Chinese government has denounced the Bill, which threatens some US$38 billion (S$52.2 billion) of US trade with Hong Kong, as an inappropriate interference in the country's domestic affairs. 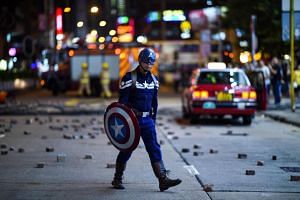 Hong Kong's hardcore protesters take justice into their own hands

"Without question, international perception is very important, and when it comes to opinions on the use of force, public figures in Washington and Wall Street certainly prefer to see peaceful singing in shopping malls and origami," activist Joshua Wong wrote on Facebook.

Mrs Lam has refused to rule out further emergency measures, or even requesting Chinese military intervention to halt the unrest.

"If the situation becomes so bad, then no option should be ruled out, if we want Hong Kong to at least have another chance," she told reporters on Tuesday.

Some don't want violence to be used as a pretext to delay district council elections on Nov 24, when many activists including Mr Wong are hoping to win seats.

Mr Cheng, the retired professor, predicted that there may be fewer violent clashes this weekend as protesters engage in more peaceful events.

"There will still be some radicals engaging in clashes, but the number of people involved and the scale and scope of the clashes may well decline a bit," he said. "There will be more gatherings in the shopping malls, singing, human chains, large groups of students marching quietly in the streets with masks, and then going home. I hope so."