HONG KONG - A planned protest rally in Central on Monday (Oct 14) evening has received clearance from the police - the first since an anti-mask law came into effect a week ago.

The rally, to start from 7pm at Chater Garden, received a letter of no objection from the police, Hong Kong news portal HK01 reported on Sunday. About 2,000 people are estimated to turn up for the event.

Organisers said that the rally - which will be "peaceful, rational and elegant" - aims to urge the United States to speed up the passing of the Hong Kong Human Rights and Democracy Act, HK01 reported.

The Act proposes economic sanctions and penalties on Chinese and Hong Kong officials found to have suppressed democracy in the city.

China has slammed the Act, saying that it will fight back against any US actions that harm China's national interest, the foreign ministry said.

The Hong Kong and Macao Affairs Office has also condemned the Act.

"We strongly condemn and firmly oppose such an act of gross interference in China's domestic affairs and serious violation of international laws and basic norms governing international relations," a spokesman said in a statement last month.

"Hong Kong belongs to China," said the spokesman, noting that the affairs of Hong Kong are purely China's internal affairs and brook no interference from any outside forces.

Organisers of Monday's Chater Garden rally said they would advise participants not to don face masks on that evening, as advised by police during a meeting on Saturday.

The Hong Kong government introduced emergency laws on Oct 5 to ban the wearing of face masks at public rallies, a move that has sparked some of the worst violence since the unrest escalated in June.

The 3m tall statue, wearing a gas mask, helmet and protective goggles, was carried up the 500m peak in the dead of night by several dozen protesters, some wearing head lamps, during an overnight thunderstorm.

It held a black banner that read "Revolution of our time, Liberate Hong Kong" and could be seen from the city below.

The statue represented an injured woman protester believed by activists to have been shot in the eye by a police projectile. One of the protesters told Reuters he hoped it would inspire Hong Kong people to keep fighting.

"We are telling people that you mustn't give up. All problems can be resolved with Hong Kong people's persistence and hard work to reach our aims," he said.

Hong Kong has been battered by four months of often massive and violent protests against what is seen as Beijing's tightening grip on the Chinese-ruled city, and more protests are planned for Sunday.

Petrol bombs were thrown inside a Hong Kong metro rail station on Saturday but no one was injured, the government said.

The MTR Corporation, which usually carries some 5 million people daily, will shut early on Sunday and the Airport Express will not stop between central Hong Kong and the airport.

Metro stations have been torched and ticketing machines damaged because protesters believe that the management of MTR, at the instruction of the government, has closed stations to hinder protesters' movements. It was forced to shut down completely last week.

The protests started in opposition to a now-abandoned extradition Bill but have widened into a pro-democracy movement and an outlet for anger at social inequality in the city, which boasts some of the world's most expensive real estate.

The unrest has plunged the city into its worst crisis since Britain handed it back to China in 1997 and poses the biggest popular challenge to Chinese President Xi Jinping since he came to power in 2012. 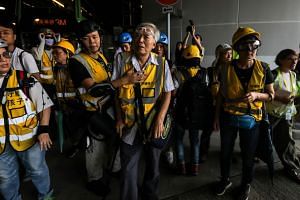 Hong Kong protesters are debating a halt to vandalism

Protesters believe China has been eroding Hong Kong's freedoms, guaranteed under a "one country, two systems" framework introduced with the 1997 handover.

The now-withdrawn extradition Bill, under which residents would have been sent to Communist-controlled mainland courts, was seen as the latest move to tighten control.

China denies the accusation and says foreign countries, including Britain and the United States, are fomenting unrest.

After almost a week of relative calm, following some of the worst violence since the unrest started, hundreds of protesters wearing face masks staged a peaceful march in Kowloon on Saturday, with only a small group trashing shops and mainland China banks.

The government said petrol bombs were thrown into the entrance of the Kowloon Tong station and a Kowloon government office was set on fire.

Riot police were deployed to the streets but protesters had dispersed without any major confrontation by early Sunday night.

Police have arrested more than 2,300 people since June.

Protesters accuse police of using excessive force, claims which the force denies. Two protesters have been shot and wounded during skirmishes with police.

Hong Kong is facing its first recession in a decade due to the protests, with tourism and retail hardest hit.

WITH REPORTING FROM REUTERS AND BLOOMBERG