HONG KONG (REUTERS) - Hong Kong's leader said on Tuesday (May 21) her administration was determined to push through an extradition Bill that could see individuals sent back to mainland China for trial, despite mounting opposition locally and internationally.

The proposed legislation has stoked mass protests in the former British colony, which was promised a high degree of autonomy under a "one country, two systems" formula when it returned to Chinese rule in 1997.

On Monday, the government said it would bypass legislative procedure to expedite the passage of amendments to the Fugitive Offenders Ordinance, which the US State Department last week described as threatening the rule of law in Hong Kong.

Opponents had disrupted a succession of legislative sessions meant to scrutinise the Bill, with brawls breaking out in the legislative council.

"The most serious issue is that we couldn't see a way forward, how to break this deadlock other than to force me to scrap this Bill, but this is unrealistic," she told reporters.

She said the Bill would now be sent directly to the full legislature on June 12 for a second reading, to try to pass it before the legislature's summer recess. 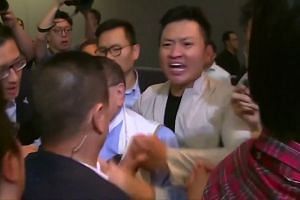 If the Bill is passed, Hong Kong would allow, for the first time, ad hoc extradition requests to countries and territories with no existing extradition treaties, including Taiwan, and crucially, mainland China.

Taiwan has said the Bill would extend China's reach into Hong Kong, putting at risk any Taiwanese who pass through the city.

The Hong Kong government insists the extradition law has safeguards to protect human rights, including the need for all extradition requests to be approved by a local court.

During the past week, Beijing has hardened its stance, with senior officials saying the law was urgently needed, though Lam said the initial push for the law had come from her government.

Criticism has also poured in from the business, legal, media and diplomatic communities in Hong Kong.

More large protests are expected, including on June 4, when the city hosts an annual candlelight vigil for victims of a bloody crackdown on the pro-democracy movement in and around Beijing's Tiananmen Square in 1989.

Lawmakers might still be able to propose amendments to the Bill, but critics say the government can choose not to adopt them, given backing from a pro-Beijing majority in the legislature.

"In one swoop it finishes Hong Kong. It's a massacre of our freedom, of our legal system, of the free press. Everything," Lai said.