HONG KONG (BLOOMBERG) - Historic crowds shut down central Hong Kong for a second straight weekend on Sunday (June 16), calling on embattled leader Carrie Lam to step aside. There's one problem: Nobody seems quite sure who should replace her.

Many of the hundreds of thousands of protesters who turned out on Sunday - organisers put the number at around two million people - said that Mrs Lam's days were numbered even after she "paused" a Bill that would, for the first time, allow extraditions to China.

Just before 9pm, Mrs Lam issued a statement apologising for causing "substantial controversies and disputes in society" - though it was accepted by few swarming downtown streets.

Said Ms Ada Ku, a 38-year-old high school teacher: "She is just trying to hang onto power. I don't think her apology is sincere."

The protesters are aiming to knock out Mrs Lam in a show of people power that has gripped the world, embarrassing Beijing at a time when President Xi Jinping is engaged in an escalating economic fight with the Trump administration.

Yet even if she eventually steps down, a widening gap between the financial hub and the mainland will put her successor in a similarly difficult position.

Student Casper Ng, 22, when asked who should take over from Mrs Lam if she resigns, said: "I can't see any viable candidates.

"Most importantly, this person must listen to public views, not just the central government." 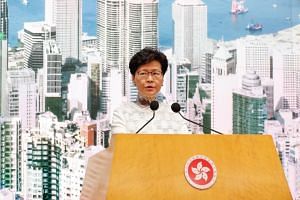 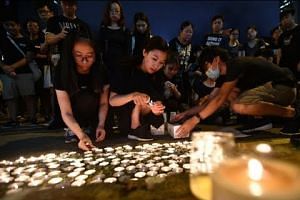 Mrs Lam has failed to heal divisions in the former British colony two years after taking over from her unpopular former boss, Mr Leung Chun Ying, who was forced to forgo seeking a second term due to widespread discontent.

While Mrs Lam may have underestimated the opposition to her extradition Bill, her task was complicated by the requirement to serve two masters - Hong Kong and Beijing - without a public vote to provide a mandate.

"You're sandwiched between Beijing, which keeps giving orders, wants the Hong Kong government to toe the line on everything. Then you have the demands and expectations of Hong Kong society on the other hand."

While governing Hong Kong would be difficult for anyone, Mrs Lam's failure has been having a "tin ear", said Mr Jeffrey Wasserstrom, professor and China historian at the University of California, Irvine. The latest example, he said, was waiting for some 24 hours to apologise even after suspending the Bill.

"It's here that Carrie Lam has been failing," he said.

The extradition saga raises new questions about whether Hong Kong is governable under the "one country, two systems" framework devised before the city's return to Chinese rule 22 years ago. And it puts new pressure on China to either compromise on activists' democratic demands or risk further unrest that could destroy its viability as one of the world's great financial centres.

Many protesters liken Mrs Lam to Mr Tung Chee Hwa, who was Hong Kong's first leader after the handover to China in 1997 and forced from office by mass protests. He had championed a controversial national security law, which - like Mrs Lam's extradition Bill - stoked fears of a Beijing-led crackdown on freedoms.

Since the 2003 demonstrations, the overriding instruction from Beijing to Hong Kong has been to avoid large public protests that could risk spreading to the mainland, wrote Mr David Webb, a Hong Kong activist investor, in a blog post titled "Why Carrie Lam must go".

"There will be a period of time inserted before she makes some alternative excuse for stepping down," Mr Webb told Bloomberg Television on Monday. "But any second term for her, which would start in 2022, is completely out of the question."

For Mrs Lam, a career civil servant, it's been a stunning fall. She was raised in a walk-up apartment in the Wan Chai district - where many protesters gathered on Sunday - and recalled doing homework on the bed because she lacked a desk. After graduating with a sociology degree from the University of Hong Kong (HKU), she joined the government.

She earned a reputation as a tough negotiator over the years. In 2007, she walked into an angry crowd to explain why Hong Kong was demolishing a historic pier. Then again during the Occupy movement in 2014, as the city's no. 2 official, she met pro-democracy protesters to seek a deal to clear barricaded streets.

Ms Yvonne Leung, who negotiated with Mrs Lam as head of the HKU student union during Occupy, said the group requested through intermediaries to negotiate with Mrs Lam because she was known as a mediator willing to make concessions.

"Five years ago, she was more sensible than she is now," said Ms Leung.

"This time she just took a hard line." 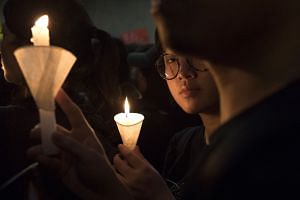 In Pictures: Mass rally on Sunday over extradition Bill in Hong Kong

From national security to extradition: A history of massive Hong Kong protests

In announcing the Bill's suspension last Saturday, Mrs Lam angered protesters by defending police descriptions of a demonstration last Wednesday as a "riot" and insisting the proposal wouldn't be withdrawn. On Sunday, opponents vowed to continue organising strikes and protests until Mrs Lam reversed those decisions and stepped down.

Said Ms Bonnie Leung, a protest organiser: "Why do so many people bother to take to the streets? Because there's nothing else we can do.

"We don't have votes to vote people down, to stop things from happening."

The show of people power essentially makes it impossible for Mrs Lam to move forward on the Bill. One of her top advisers, Mr Bernard Chan, told Bloomberg Television on Monday that "there's no chance the Bill will be reintroduced" because the legislative term ends next year.

"I don't think anybody sane enough wants to take up this job," Mr Chan said when asked if he wanted to take over from Mrs Lam.

"The person in charge of 'one country, two systems' needs to look after Hong Kong interests as well as the nation's interests. You can't look at one and not the other."

In a separate radio interview on Monday, Mr Chan pleaded with the public to give Mrs Lam a second chance, the South China Morning Post reported. He called on the public to focus on her "other vast achievements and hard work" over the past two years instead.

Saying that Mrs Lam would be more humble going forward, he added that she had been "deeply remorseful" and had reflected on her mistakes in relation to the legislation.

"She has already expressed apologies in her opening remarks at the press conference, maybe she hasn't repeated that during the question and answer session.

"She is not a politician by career, perhaps she needs to improve on this front, that she needs to understand she has to apologise time and again in public," Mr Chan said, in a reference to Mrs Lam's apology on Sunday night.

The top spot in Hong Kong may be a poisoned chalice. Mrs Lam is just the fourth chief executive since Mr Tung quit. His successor, Mr Donald Tsang, was convicted on corruption charges after his term and released in January. Mr Leung Chun Ying scrapped his re-election bid after his tenure was plagued by protests and the emergence of a small but disruptive independence movement.

"Even if she stays on, she can't do anything for Hong Kong," he said.

"She is absolutely a lame duck now."