HONG KONG - Even as Hong Kong's economy is likely to slow further this year due to uncertainties from the trade row between the United States and China and a weaker property market, the government has pledged to plough more money into diversifying the economy, saving jobs and improving lives.

In his budget speech on Wednesday (Feb 27), Financial Secretary Paul Chan said Hong Kong's economy grew 1.3 per cent in the fourth quarter of last year, the lowest in two years.

This brings the full year growth to 3 per cent, lower than the government's forecast of 3.2 per cent.

The weaker trend is expected to spill over to this year, with economic growth pegged at 2-3 per cent.

"However, should the external headwinds deteriorate, especially if the US-China trade conflict escalates, global trade, investment and financial markets will be subject to greater shocks. This will not only affect our exports and asset markets, but also dampen local investments and private consumption," warned Mr Chan.

Financial services, tourism, trading and logistics, as well as professional and business support services made up more than 57 per cent of Hong Kong's gross domestic product in 2017.

But these "are highly susceptible to changes in the external economy", said Mr Chan, who stressed the importance of riding on the development of the Greater Bay Area and China's Belt and Road Initiative to diversify the economy and extend market coverage "so as to offer more opportunities for our young people".

A key prong is to push further in technology and innovation. 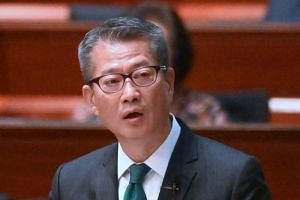 The government will earmark HK$16 billion (S$2.7 billion) to enhance the facilities of qualifying universities in order to boost research and development (R&D) and will raise the monthly allowance of researchers.

It will set aside HK$5.5 billion to develop tech hub Cyberport 5, and spend HK$500 million on implementing the IT Innovation Lab in the Secondary Schools Programme in the coming three school years, among others.

To support small and medium enterprises (SMEs), Mr Chan said he will waive business registration fees for the year, provide more funds for those that adopt technology and raise the maximum amount of funds each enterprise is eligible under the Branding, Upgrading and Domestic Sales fund.

In a bid to rejuvenate the flagging maritime industry, the government is looking into ways to attract ship finance companies to develop Hong Kong into a ship leasing centre.

To offset the impact of a weaker Chinese yuan which has hit retail sales growth and visitor spending by mainland tourists, the government is allocating some HK$353 million to promote Hong Kong as a tourism destination.

It will also speed up various housing projects and inject more than HK$10 billion to improve healthcare services.

As widely-expected, fewer sweeteners were announced this year but the government proposed a 75 per cent reduction of profits tax, salaries tax and tax under personal assessment for the current year of assessment, capped at HK$20,000.

It will also waive property rates for four quarters, give extra allowances to social security recipients and provide one-off grants for students and the elderly.

Mr John Timpany, tax partner at KPMG China, noted that there were no surprises this year, as the government continued to throw its weight behind innovation and R&D.

One area where he would like to see more emphasis is education.

"There is money going into education... but perhaps with the changing nature of work and the importance of technology going forward, it would be good to see a bit more done to improve Hong Kong's education system, to prepare the people for the future and challenges ahead," Mr Timpany said.

Asked how far this budget would go in helping Hong Kong buffer the effects of global tensions, he said: "There's only so much a government can do... you're always exposed to the whims of the global economy and the ups and downs of very large economies. I think it's unrealistic to expect complete sheltering of both effects in Hong Kong."