Despite growing public support for gay marriage in the international financial hub, campaigners have made little headway against staunch opposition from the city's successive pro-Beijing governments and religious conservatives.

A Hong Kong woman, known only as MK, is suing the government for denying her right to enter into a civil partnership with her female partner, arguing the ban is unconstitutional.

The case is currently being heard by the Court of First Instance.

Defending the current ban, government lawyer Stewart Wong told the court on Wednesday (May 29) that marriage would be "diluted and diminished" and "no longer special" if that right was granted to same-sex couples.

"Not all differences in treatment are unlawful. You are not supposed to treat unequal cases alike," Wong said, adding that Hong Kong's definition of marriage was already defined by law and "cannot be trumped".

"To recognise an alternative form of same-sex relationships which we say is tantamount to a (marriage) is to undermine the traditional institution of marriage and the family constituted by such a marriage," Wong said.

The Hong Kong government's view stands in stark contrast to nearby Taiwan where lawmakers made history approving Asia's first gay marriage law earlier this month, despite a conservative backlash. 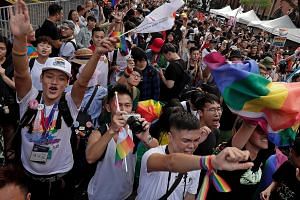 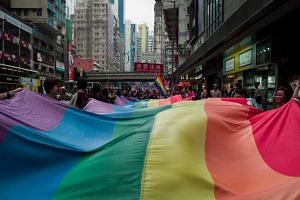 There were jubilant scenes in Taipei as the first same-sex couples were wed with government officials saying they hoped the move would also draw more international business.

A poll last year by Hong Kong University found public support for gay marriage had risen to 50 per cent, a 12 per cent increase in four years.

But the city's government remains unmoved.

In a recent radio interview, even the head of Hong Kong's equality watchdog said it was "impractical" and a "waste of resources" to push for marriage equality, Hong Kong Free Press reported.

On Tuesday, MK's lawyer Gladys Li argued that it is "now or never" for Hong Kong's LGBT couples to secure civil partnership and marriage rights.

Li likened marriage to a "private members' club" when limited only to heterosexual couples.

Hong Kong does not recognise same-sex marriage or civil unions and only decriminalised homosexuality in 1991.

But a British lesbian won the right to live and work in Hong Kong with her partner in a landmark ruling last year hailed by rights groups.

A separate case has been lodged by two Hong Kong men directly challenging the same-sex marriage ban as unconstitutional.

And a transgender pastor from a church that welcomes gay congregants has sought permission to launch his own legal challenge, arguing his inability to perform same-sex ceremonies breaches his community's religious freedoms.