HONG KONG (REUTERS, BLOOMBERG) - Hong Kong is gearing up for an annual pro-democracy march on Monday (July 1), the anniversary of its handover to Beijing, that could see a big crowd amid widespread anger over an extradition Bill that has already seen millions take to the streets.

In recent years, the anniversary of the handover of the former British colony in 1997 has been marked by deepening despondency about what many residents see as increasing meddling by the mainland and the erosion of freedoms.

Beijing denies interfering but for many Hong Kong residents, a proposed extradition law, that would allow people to be sent to mainland China for trial, is the latest step in a relentless march towards mainland control.

“If Hong Kong is no longer an international city, Hong Kong will perish,” former opposition lawmaker Margaret Ng said at a rally late last Friday. “It’s our responsibility to let the world know.”

Embattled Hong Kong leader Carrie Lam, who is backed by Beijing, promoted and then suspended the extradition Bill after some of the biggest and most violent protests in the city in decades against it.

Mrs Lam apologised to the public for the upheaval the Bill had caused and while she said she had heard the people “loud and clear”, she stopped short of activists’ demands to scrap it and rejected calls to step down.

Activists are also demanding the government drop all charges against those arrested during the latest protests, charge police with what they describe as excessive use of force and stop referring to the demonstrations as a riot, a term than can bring a heavier jail sentence.

The annual July 1 protest march organised by the Civil Human Rights Front, which has drawn as many as 400,000 people in previous years, will test whether activists can keep up the momentum.

More than a million people have taken to the streets at times over the past three weeks to vent their anger and frustration at Mrs Lam, posing the greatest popular challenge to Chinese leader Xi Jinping since he came to power in 2012. 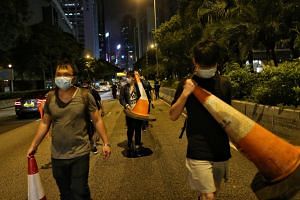 Britain says Hong Kong is a litmus test for China

Hong Kong returned to Chinese rule on July 1, 1997, under a“one country, two systems” formula that allows freedoms not enjoyed in mainland China, including freedom of protest and a much-cherished independent judiciary.

Opponents of the extradition Bill see it as a threat to the rule of law and fear it would put them at the mercy of China’s justice system where human rights are not guaranteed.

After promises that post-handover Hong Kong would enjoy autonomy, Beijing’s squeeze has fuelled resentment and in 2014 sparked pro-democracy protests that paralysed parts of the city for 79 days.

The failure of those protests to wrestle concessions on democracy, coupled with prosecutions of at least 100 protesters, most of them young, had discouraged many activists from going back to the streets – until recent weeks.

The turnout at the handover protest in 2018 was one of the lowest ever after Hong Kong’s opposition lost steam following the disqualification of pro-democracy legislators and the jailing of some of the most prominent activists.

Organisers said about 50,000 people rallied last year, while police put the number at 9,800 at its peak.

On Monday, she will start her third year facing a crisis as great as any of her predecessors.

Mrs Lam is expected to make her first public remarks in more than a week on Monday to mark Hong Kong's return to Chinese rule in 1997, with both her approval rating and public faith in Beijing at record lows.

The political turmoil raises new questions about China's stewardship over Hong Kong, almost halfway through its 50-year promise to preserve capitalist markets and personal freedoms in the former British colony.

Mrs Lam and her backers in Beijing so far appeared determined to hang on, lest they risk emboldening a more unified opposition bent on stymieing their agenda.

"Long story, short: She won't yield, she won't budge. The people won't yield, won't budge either," said Ms Claudia Mo, an opposition lawmaker who has been a prominent participant in recent rallies. "So this is a standoff, a deadlock. What's going to happen is more protests. It's an ongoing fight."

Be careful what you wish for: Hong Kong's next leader could be worse than Carrie Lam

While the opposition coalesced against Mrs Lam's now-suspended proposal to allow extraditions to China, the latest rallies have begun to emphasise demands for greater democracy and criticism of the Communist Party.

Mrs Lam is expected to attend a flag-raising ceremony and a reception on Monday morning to commemorate the occasion, potentially including her first remarks since June 18. Looking on will likely be pro-establishment lawmakers growing more anxious about next year's elections for the Legislative Council, a body that the opposition could use to block government initiatives.

Ms Starry Lee, chairman of the biggest pro-Beijing party, the Democratic Alliance for the Betterment and Progress of Hong Kong, has urged Mrs Lam to acknowledge that the extradition Bill has been withdrawn as protesters are demanding. Mr Felix Chung, who represents the textile and garment industries in the legislature, has called for a Cabinet shake-up to include more diverse views.

"The chief executive has said she would listen sincerely to public views and do more public consultation in the future," Mr Chung said. "Future policies may be rolled out more slowly, but each decision would be a right one."

Still, Mrs Lam will struggle to rebuild support after repeating the political slide of her unpopular predecessor Leung Chun-ying. Her approval rating plunged 9 percentage points to 23 per cent - the lowest since she took power, according to a survey released last week by the University of Hong Kong (HKU) Public Opinion Programme.

Support for the former British colony's government fell to 18 per cent, the lowest since 2003, the poll conducted from June 17 to 20 showed.

The city's political factions will face a test of electoral support as early as November, when voters will elect more than 450 representatives on local district councils. A big defeat could increase pressure on China to replace Mrs Lam, like the city's first chief executive Tung Chee-hwa, who resigned in 2005 after similar mass protests.

"The chief executive will continue to work hard," Mrs Lam's No. 2, Chief Secretary Matthew Cheung, told reporters last Friday. "We learn from experience. We will make improvements to our future policy direction and style of governance."

The price of gridlock for Beijing is more events like rallies this month that illustrated domestic weakness just as President Xi was preparing to meet US President Donald Trump at the Group of 20 summit.

Moreover, the Communist Party does not want to risk greater instability in Hong Kong, where an HKU poll last week found that only 27 per cent feel proud about becoming a Chinese citizen - an all-time low.

The result "clearly reflects the impact of this incident to Hong Kong citizens' ethnic identity recognition and feelings towards the handover of sovereignty", the polling institute said.

Ms Bonnie Leung, a vice-convener of the Civil Human Rights Front, said the government needs to "go to the streets" and understand why the people have come out against it.