The proposed law would be the "worst thing" to happen in Hong Kong since its 1997 handover from the UK to China, said Mr Patten, who was the last colonial governor of the territory.

"It's not surprising that this has caused as much alarm as it has in Hong Kong," Mr Patten said in an interview on Tuesday (May 21) in London ahead of a speech for the Salzburg Global Seminar.

Hong Kong's legislature is debating a controversial proposal to allow extraditions to mainland China. The plan, which would also ease extraditions to Taiwan and Macau, could open the door to Hong Kong citizens and foreign residents being prosecuted on the mainland.

Critics say the plan will erode the autonomy guaranteed to Hong Kong before its return to China, and business groups have warned it could reduce the city's appeal as a global financial hub.

"If China starts to treat Hong Kong as though it was simply part of the mainland, as though it were Shenzhen or Shanghai, sooner or later the international community will be encouraged to think, well, in that case that Hong Kong ceases to be special," he said.

Mr Patten said the law would remove the firewall between Hong Kong and China. Hong Kong citizens risked being subjected to the Chinese "rule by law" system with "no real distinction between the courts, the security services and what the party wants to happen," he said, referring to China's Communist Party. 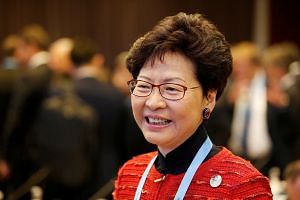 As many as 130,000 people took to the streets to protest against the bill in April, and the discussion in the legislature descended into a brawl earlier this month in which lawmakers yelled, shoved and climbed over each other. The Beijing-backed government has proposed the resumption of the second reading of the bill on June 12.

The debate comes against the broader backdrop of concern about the slow creep of Chinese influence in Hong Kong.

An event in June commemorating the 30th anniversary of the Tiananmen Square crackdown could be another opportunity for pro-democracy forces to show their numbers.

Hong Kong Chief Executive Carrie Lam, whom pan-democratic lawmaker Claudia Mo this month described as "just a puppet," has said there's been misunderstanding about the bill, which was spurred by a high-profile 2018 murder case against a Hong Kong resident who confessed to killing his girlfriend in Taiwan. The confession came after the man returned to Hong Kong, which doesn't have an extradition agreement with Taiwan.

China's foreign ministry has said the bill is necessary to "uphold the rule of law" in Hong Kong.

The situation in Hong Kong - in terms of free society and the rule of law - has worsened since 2012 under President Xi Jinping, Mr Patten said.

"Just as he's tightened his grip in China, so he's done the same in Hong Kong," he said. "People talk about China's role in the 21st century, but the Chinese have yet to prove that we can trust them."