HONG KONG - Hong Kong police fired tear gas and pepper spray in clashes with protesters on Sunday (Sept 29) as democracy campaigners stepped up their rallies ahead of China's 70th national day on Tuesday and the city's leader prepared to make a visit to Beijing for the celebrations.

In the second day of violence this weekend, police fired tear gas at protesters near the upscale Pacific Place mall in Admiralty, in the central business district, and earlier at the Causeway Bay shopping district where the march to the government headquarters began.

The Sogo department store and World Trade Centre shopping malls in Causeway Bay were closed ahead of the march. Organisers had not sought police permission for Sunday's procession.

Clashes occurred in Causeway Bay, when police fired tear gas to disperse protesters who had thrown bottles and other objects towards them. Some of the protesters were arrested.

The protesters later regrouped and continued on the march to the government complex, located 2.4km away. Many held up umbrellas against the muggy heat as they shouted slogans such as “five demands, not one less”.

Running battles also took place near Pacific Place, with police retreating after firing tear gas. That allowed the protesters to continue on their march westward, with some occupying Harcourt Road, a major highway in Admiralty.

But tensions escalated after protesters tossed Molotov cocktails into the government complex and lobbed rocks and bricks at its windows.

Their actions sent the riot police rushing out of the building to fire tear gas and water cannons, causing mass chaos as protesters ran, though some were pinned to the ground and detained by police.

Within minutes, the road was cleared of protesters, and littered with umbrellas, traffic cones, plastic bottles and even shoes that protesters had abandoned.

Mr Tom Chan, who only had a surgical mask, said he had turned up dressed for a normal protest because he “didn’t think the police would come down so hard”.

“It’s supposed to be a peaceful march. If the government had tried to meet the people’s demands, or even deal with the underlying social issues, we wouldn’t be in this state,” he told The Straits Times.

Some 30 of those arrested were later frogmarched into the government compound where dozens of police vehicles had been waiting.

The street battle was witnessed by dozens of people standing at an overhead bridge leading to the Pacific Place mall, many holding up their mobile phones.

After the chaos, the police were seen arguing with a group calling itself “Protect Our Children” that had wanted to stop the police from making further arrests. Some of the officers were heard retorting back: “If you don’t want them to be arrested then tell them not to throw bricks in the first place.”

As night fell, running street battles continued with police pushing protesters back towards Causeway Bay, the starting point of the march.

Demonstrators left a trail of rubbish fires and barricades in their wake in an attempt to slow the police advance. All along the way, residents shouted abuse at officers.

CARRIE LAM TO LEAVE FOR BEIJING

In a surprise announcement on Sunday, the government said Chief Executive Carrie Lam, who has faced the brunt of the protesters' ire, will leave for Beijing on Monday to celebrate the 70th anniversary of the China's founding. She will return to Hong Kong on Tuesday night.

Mrs Lam had sent out invitations “requesting the pleasure of your company” at a flag-raising ceremony and National Day reception at the Convention and Exhibition Centre in Wan Chai.

The reason for the change in plan was not clarified but the government said Chief Secretary for Administration Matthew Cheung Kin Chung would take her place.

Protesters march towards the government headquarters shouting “five demands, not one less”

Sunday's rally against the government was part of planned global protests Hong Kong’s pro-democracy movement have called a "Global Anti-Totalitarianism March". Following a call on the Internet, solidarity marches are taking place in at least 64 cities around the world, in countries including the United States, Japan and Malaysia.

In Australia, more than 1,000 black-clad protesters turned up for a rally in central Sydney, some carrying yellow umbrellas and signs reading "Save Hong Kong". It was one of the city's largest solidarity marches since the pro-democracy protests began in March, Agence France-Presse reported.

The Singapore Police Force issued a statement last Saturday saying it will not grant any permit for assemblies that advocate the political causes of other countries.

Meanwhile, pro-Beijing supporters in Hong Kong countered Sunday's planned protests with their own rally near Victoria Harbour, where they sang the Chinese national anthem and waved the national flag, AP reported.

On Saturday night, an approved evening rally to mark the fifth anniversary of the Umbrella Movement, which called for universal suffrage, was cut short after small groups of protesters threw Molotov cocktails, bricks and rocks at government buildings. Police responded with tear gas and water cannon, spraying protesters with a blue dye. 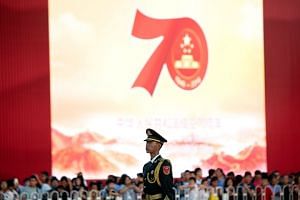 In Hong Kong, unity between peaceful and radical protesters. For now

NO SIGNS OF SLOWING DOWN

Into its 17th weekend, the protests which escalated in June over a now-suspended extradition Bill show no signs of slowing down, with demonstrators now calling for electoral reforms, amid other demands.

In response to calls for universal suffrage at Saturday's rally, the government said the "one person, one vote" principle for selecting the Chief Executive and electing all members of the Legislative Council is "enshrined as an ultimate aim in the Basic Law" of the territory.

"To achieve this aim, the community needs to engage in dialogues, premised on the legal basis and under a peaceful atmosphere with mutual trust, with a view to narrowing differences and attaining a consensus agreeable to all sides," it said in a statement.

Besides universal suffrage, the other four key demands of protesters are: complete withdrawal of the extradition Bill; the release of all protesters arrested; removing the label of protests as "riots"; and an independent judge-led inquiry into allegations of police brutality.