HONG KONG (BLOOMBERG) - An economist says he was pushed out of his job at a Chinese bank, in part due to his views on the impact of Hong Kong's protests.

A brokerage employee in the city is looking for a new job because she disagrees with her bosses' politics.

An investment banker says he avoids talking to most colleagues about the unrest, fearing it may damage his career.

At financial firms across Hong Kong, personal political views that used to have little bearing on work are taking on new significance as the city's pro-democracy protests harden opinions on both sides of the debate.

For some in the industry, it's making an already difficult business environment even tougher to navigate and fuelling concerns about Hong Kong's future as one of the world's premier financial hubs.

The change is being felt most acutely at state-owned Chinese financial companies, where several backers of the protests say they fear retribution from superiors if they're found to attend rallies or otherwise support the pro-democracy movement.

Mr Law Ka Chung, the former chief economist at Bank of Communications (Hong Kong), has gone public with his concerns, saying on Tuesday (Dec 3) that he suspects he was ousted in part because his research contradicted the Chinese government's narrative on Hong Kong.

While global banks operating in the city are more insulated from local politics, they aren't immune.

At BNP Paribas SA, a legal executive left the company in September to focus on activism after social media posts on his personal account led to a public apology from the bank.

In Citigroup's Hong Kong office, some pro-Beijing staff are now socialising less frequently with their pro-democracy counterparts, with the rift becoming more apparent in the wake of a widely circulated video of one of the firm's investment bankers getting arrested after a scuffle with police, according to employees familiar with the matter.

The employees, who asked not to be named discussing a sensitive subject, emphasised that in most cases, the differences of opinion have yet to get in the way of work. 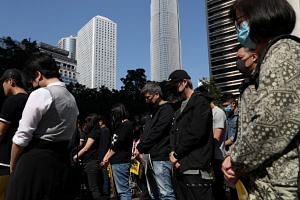 When a JPMorgan Chase & Co banker from mainland China was filmed getting punched during his lunch break after shouting "we are all Chinese" at a crowd of yelling protesters, several employees complained verbally to their managers about his behaviour, a person with knowledge of the matter said.

It isn't clear from the video what initially sparked the confrontation, and there's no indication it was connected to his employer.

Conversations between some JPMorgan staff from mainland China and their peers from Hong Kong have become less frequent since the protests began, two people said.

For senior managers in Hong Kong's financial industry - which accounts for about 20 per cent of the city's gross domestic product - the potential for rising workplace tensions adds to challenges that already include a sinking local economy and a pullback in deal-making.

Banks have to find ways to accommodate employees with differing views without getting caught up in controversies that damage their brands, said Mr Benjamin Quinlan, chief executive officer of financial services consultancy Quinlan & Associates in Hong Kong.

"Firms need to be much more clever about the way things are handled, carefully balancing free and open thinking while ensuring ongoing employee professionalism," said Mr Quinlan, a former executive at Deutsche Bank.

In response to questions from Bloomberg News, a Citigroup spokesman said the US bank "values diversity and inclusion, which speaks to not just gender or ethnic diversity but also diversity of thought. We respect people with different views and perspectives and our staff and clients respect that diversity too".

A JPMorgan spokesman said the firm's employees "come from all walks of life and so many different backgrounds and continue to support each other".

BNP declined to comment when the executive left in September, while Bank of Communications didn't respond to a request for comment.

Mr Law, who spent more than 14 years at the Chinese bank, wrote in an August article that Hong Kong's protests would deepen the city's slowdown but that their impact was limited, a view that contradicted the dire outlook in China's state-run media.

He said he was asked to leave the bank shortly after he shared with colleagues a link to an outside article critical of China's firewalls and closed system.

He left behind a team of mainly local Hong Kongers.

"I wish them good luck," he said in an interview.

Ms Man, 25, who works in the back office at a Chinese brokerage in Hong Kong, said department heads of her firm have told employees that they'll be fired if they participate in pro-democracy protests.

The company sends staff to pro-police rallies, which Ms Man has attended even though she also takes part in pro-democracy protests without telling her employer.

While she wants to leave the firm, she's finding it difficult because most of the job openings she sees in Hong Kong are with mainland Chinese companies.

Like others who agreed to speak for this article, she asked to use only one name because of the subject's sensitivity.

Jason, who works at a Chinese investment bank in Hong Kong, said most of the senior executives at his firm openly condemn the protests and are strongly supportive of Beijing.

He said lower-level managers who have lived in Hong Kong for years tend to have a milder stance - supporting the right to demonstrate while condemning violence - whereas middle and back-office workers are typically Hong Kong locals who back the protesters.

Jason said his views place him somewhere in the middle of the spectrum.

Wary of offending someone on either side, he takes care to speak about the protests only with his closest co-workers when they're outside the office on cigarette breaks.

Another banker, surnamed Chan, said he's part of a small minority of pro-democracy employees at a Chinese securities firm.

Fearful of people who might out him to pro-Beijing managers, he keeps quiet when colleagues discuss the protests at lunch.

He says some of his peers have been reported to high-level bosses in China for social media posts that contradict Communist Party messaging.

Chan keeps his own posts on Facebook and WeChat free of politics, though he sometimes shares song lyrics that convey subtle messages of support for the pro-democracy movement.