HONG KONG (NYTIMES) - A lawmaker, a father, his teenage son and a woman who was too scared to show her face spoke on Wednesday (July 24) about an attack in a Hong Kong train station by a mob of men armed with sticks and poles.

The assault on Sunday targeted people who were returning from anti-government protests and raised the fears of violence compounding political upheaval in the city.

Mr Lam Cheuk-ting, a pro-democracy lawmaker who rushed to the scene of the attacks in the satellite town of Yuen Long, said blame lay with both police, who failed to protect people, and the organised crime groups known as triads, who allegedly carried out the attack.

"The police and the triads now rule Yuen Long together," said Mr Lam, who was beaten in the attack and required 18 stitches for cuts to his mouth.

The mob attack has stirred fear and anger in Hong Kong. The streets of Yuen Long were desolate on Monday night, with businesses closing early and residents staying home out of fear of further violence.

Police have arrested 11 men accused of being connected to the mob attack, and local news outlets have reported that some of those arrested have affiliations with two prominent triads, 14K and Wo Shing Wo.

Here is a look at the history of the triads and their past political violence in Hong Kong.

WHAT ARE THE TRIADS?

Triads have historical roots in the secret societies and trade associations organised to protect territory, business and sometimes illicit activity. During the Qing dynasty, they helped resist the Manchu who ruled China, and they were enlisted by the Chinese Nationalist Party, or Kuomintang, when it came to power after the collapse of the Qing in 1911. 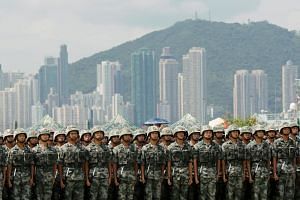 Chinese troops can be deployed to restore order in HK, says Beijing in warning to protesters

The Kuomintang used Chinese criminal gangs to attack their political enemies at various times during the Republican era in China. It used the Green Gang in Shanghai to suppress unionists and help massacre thousands of communists in that city in 1927.

In Taiwan, where the Kuomintang fled to in 1949 after losing a civil war to the Communist Party, gangs still sometimes wield political influence. The Bamboo Union triad helped suppress the pro-democracy movement in Taiwan in the 1980s, and in 1984, members of the gang assassinated Mr Henry Liu, a journalist critical of the Kuomintang, in Daly City, California.

Mr Chang An-lo, a former leader of the Bamboo Union triad who spent 10 years in prison in the United States for drug trafficking, leads a pro-China party in Taiwan whose members have attacked people critical of the Beijing government.

WHAT IS THEIR HISTORY IN HONG KONG?

A century ago, Hong Kong had hundreds of triads, their numbers lifted waves of immigration from mainland China. Today, there are only a few dozen groups with interconnected ties and allegiances.

Some triad members in Hong Kong helped leaders of the Tiananmen Square protests flee China after a deadly military crackdown in June 1989. Before Britain returned the city to Chinese control in 1997, the mainland authorities sought to co-opt triads in order to curb their assistance to pro-democracy demonstrators and promote stability during the sensitive handover period.

"The members of triads are not always gangsters," Mr Tao Siju, China's chief law enforcement officer, said during a visit to Hong Kong in 1992. "As long as they are patriots, concerned with maintaining the prosperity of Hong Kong, we should respect them."

The triads have a patriotic reputation, but their deepest allegiance is to cash, said Professor Lo T Wing, who researches triads at the City University of Hong Kong.

"They don't work for political ideology," he said. "Individual triad members have their own ideologies, but triads as a group - they work only for money."

WHAT IS THEIR HISTORY OF POLITICAL VIOLENCE?

In the past decade, gang members have sometimes carried out assaults in Hong Kong with political implications. Mr Kevin Lau, former chief editor of Ming Pao, a prominent Hong Kong newspaper, was seriously injured in a knife attack in 2014.

During the pro-democracy Umbrella Movement demonstrations later that year, a gang of men, including several believed to have triad connections, attacked a protest encampment in the Mong Kok district in Kowloon.

The attack in Yuen Long was meant to frighten people from attending protests, Prof Lo said, but the extremes of the mob violence drew attention from the damage done by demonstrators to the Chinese government's liaison office.

WHAT IS THEIR HISTORY OF COLLUSION WITH POLICE?

After World War II, corruption among Hong Kong police officers and collusion with triads was common. Public anger grew after the police chief, Peter Fitzroy Godber, was found in 1973 to have hundreds of thousands of dollars in overseas accounts. That helped inspire aggressive reforms, and today the territory is regularly ranked highly on anti-corruption indexes.

Critics of police in Hong Kong have accused them of acting in collusion with the thugs who attacked people Sunday. None of the men thought to have carried out the attacks were arrested that night, and officers were seen calmly chatting with men carrying sticks and metal bars and wearing white T-shirts, the attire of the thugs.

Law enforcement officials have said police were slow to respond because so many officers were needed for protests on Hong Kong Island, about24km south of Yuen Long.

Prof Lo said, however, that police animosity towards the black-shirted protesters - whom they had clashed with for weeks - was the most likely factor in the slow response.

"If I were a policeman under attack for the past two months, with my family members bullied, not to mention other violence, what is the morale?" he said. "If I got some reports that said black shirts were under attack, do you think I'd respond energetically? Of course not. This is natural, but of course it's not normal."