HONG KONG (AP, REUTERS, BLOOMBERG) - Flights resumed at Hong Kong’s airport on Wednesday (Aug 14) after two days of disruptions marked by outbursts of violence that highlight the hardening positions of pro-democracy protesters and the authorities in the semi-autonomous Chinese city.

A State Department spokesman also expressed concern about reports of movements of Chinese forces on the border with Hong Kong and urged Beijing to honor the territory’s autonomy.

“The United States is deeply concerned by reports of Chinese paramilitary movement along the Hong Kong border,” the spokesman said, referring to satellite photos showing what appear to be armoured personnel carriers and other vehicles belonging to the China's paramilitary People's Armed Police parked in a sports complex in the city of Shenzhen.

About three dozen protesters remained camped in the airport’s arrivals area a day after a mass demonstration and frenzied mob violence forced more than 100 flight cancellations. Additional identification checks were in place, but check-in counters were open and flights appeared to be operating normally.

The Hong Kong Airport Authority has stepped up security checks at Chek Lap Kok, restricting access to the departure and arrival halls with new checkpoints, RTHK reported on Wednesday.

New crowd control measures were seen at the area where people taking buses get off and some were put up near the Airport Express train platforms. People going into the airport had to show their travel documents to proceed further.

The airport’s management said it had obtained “an interim injunction to restrain persons from unlawfully and wilfully obstructing or interfering” with airport operations. It said an area of the airport had been set aside for demonstrations, but no protests would be allowed outside the designated area.

Meanwhile, protesters spread pamphlets and posters across the floor in a section of the airport terminal but were not impeding travellers. Online, they also circulated letters and promotional materials apologising to travellers and the public for inconveniences during the past five days of airport occupations.

“It is not our intention to cause delays to your travels and we do not want to cause inconvenience to you,” said an e-mailed statement from a group of protesters. “We ask for your understanding and forgiveness as young people in Hong Kong continue to fight for freedom and democracy."

The airport had closed check-in for remaining flights late on Tuesday afternoon as protesters swarmed the terminal and blocked access to immigration for departing passengers. Those cancellations were in addition to 200 flights cancelled on Monday.

Hong Kong police said they arrested five people during clashes with pro-democracy protesters at the airport on Tuesday night.

Assistant Commissioner of Police Operations Mak Chin Ho said the men, aged between 17 and 28, were arrested for illegal assembly. Two were also charged with assaulting a police officer and possessing offensive weapons as riot police sought to clear the terminal.

More than 700 protesters have been arrested in total since early June, mostly men in their 20s and 30s, but also including women, teenagers and septuagenarians.

Mr Mak gave no further details, but said additional suspects were expected to be arrested, including those who assaulted an officer after stripping him of his baton and pepper spray, prompting him to draw his gun to fend them off.

Hong Kong law permits life imprisonment for those who commit violent acts or acts that might interfere with flight safety at an airport.

More than seven million travellers pass through Hong Kong’s airport each year, making it “not an appropriate place of protest”, Mr Mak said.

“Hong Kong police have always facilitated peaceful and orderly protests over the years, but the extremely radical and violent acts have certainly crossed the line and are to be most severely condemned,” he said. “The police pledge to all citizens of Hong Kong that we will take steps to bring all culprits to justice."

Hong Kong airline Cathay Pacific said in a statement it had cancelled 272 flights over the past two days, affecting more than 55,000 passengers, while 622 departures and arrivals went ahead.

The Hang Seng stock index fell to a seven-month low on Tuesday and embattled Hong Kong leader Carrie Lam said the city had been pushed into a state of “panic and chaos”.

China condemned some protesters for using dangerous tools to attack police, saying the clashes showed “sprouts of terrorism”.  The protests represent one of the biggest challenges for Chinese President Xi Jinping since he came to power in 2012.

Demonstrators say they are fighting the erosion of the “one country, two systems” arrangement that enshrined some autonomy for Hong Kong when it returned to China in 1997. The protests began in opposition to a now-suspended Bill that would have allowed the extradition of suspects for trial in mainland China, but have swelled into wider calls for democracy.

Some protesters used luggage trolleys to blockade the doors to customs checkpoints. Protesters also scuffled with police later on Tuesday evening, and several police vehicles were blocked amid heated scenes, according to Reuters witnesses.

This was the first time police had shown up at the airport during multiple days of sit-in protests, which have been largely peaceful. 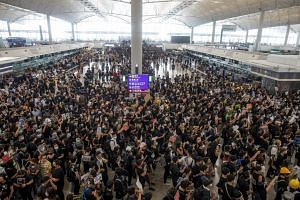 China is waging a disinformation war against Hong Kong protesters

The interruptions follow a weekend of violence that saw police fire tear gas into a subway station and shoot rubber bullets at close range.

Mrs Lam warned on Tuesday that the city risked sliding into an “abyss” as continuing unrest weighed on the economy.

A US State Department official urged China to adhere to the agreements it made when taking control of Hong Kong from Britain and allow the city to “exercise a high degree of autonomy” while respecting freedom of expression and peaceful assembly.

The statement - from an official who asked not to be identified - was the most forceful to date from the United States and followed a tweet from President Donald Trump, who said reports from American intelligence agencies show China is moving troops to its border with Hong Kong.

It wasn't immediately clear if Mr Trump was referring to new developments or mobilisations that have been underway for the past week.

Demonstrators who have been protesting for the past 10 weeks against Beijing’s growing influence in the special administrative region targeted the international airport for a second day on Tuesday.

Eye for an eye: Why Hong Kong's protesters wear patches

Scuffles broke out in the evening after an injured man was held by a group of protesters. Some claimed he was an undercover mainland Chinese agent and initially refused to let him leave.

Medics, however, bundled him onto a stretcher and forced their way through jeering throngs to an ambulance. Several police vehicles were blocked by protesters and riot police moved in amid chaotic scenes, using pepper spray to keep people back. A policeman pulled out a gun at one point but did not fire.

Protesters also barricaded some passageways in the airport with luggage trolleys, metal barriers and other objects.

Others clambered onto check-in counters as the protesters appeared to control part of the airport for a short while. At least two protesters were taken away by police.

Another mainland Chinese man was held and tied down by protesters at the airport after they thought he was posing as a reporter. The editor-in-chief of the state-run Global Times newspaper, Mr Hu Xijin, tweeted that the man was a journalist with the paper. The journalist was later taken away by ambulance.