TOKYO - Japan sweltered under an unseasonal heat wave on Sunday (May 26) that rewrote heat records for the month of May, as the mercury surged above 38 deg C in many parts of the northernmost island of Hokkaido.

The temperature hit 39.5 deg C in the coastal town of Saroma at 2.07pm (1.07pm in Singapore) in north-east Hokkaido, surpassing the previous national record for May - 37.2 deg C - set in 1993 in Chichibu city in Saitama prefecture, north-west of Tokyo.

Temperatures have never before topped 38 deg C in Hokkaido, the Japan Meteorological Agency said. The previous high for Hokkaido was 37.8 deg C, recorded in the town of Otofuke on June 3, 2014.

This was also the first time that temperatures have surpassed 35 deg C in Hokkaido in May.

The Hokkaido Railway Company, or JR Hokkaido, cancelled at least 40 train services in eastern Hokkaido over derailment concerns amid fears that the extreme heat may have distorted the railway tracks.

The weather agency said the current heat wave is due to a warm air mass, enveloping the entire Japanese archipelago, that is not typically seen until the peak of summer. The unseasonal temperatures are expected to continue through Monday (May 27) before subsiding.

Kyodo News said that out of 926 weather monitoring posts across Japan, temperatures breached 35 deg C at 53 locations and 30 deg C at 513 spots.

Many Japanese were surprised that Hokkaido, known for its cold winters, would be even hotter than tropical south-western Okinawa. Some were also concerned that they will be in for a hellish summer that is even more brutal than the one last year.

A heat wave last year that the government designated as a natural disaster pushed the mercury to an all-time national high of 41.1 deg C in Kumagaya, east of Tokyo, on July 23.

At least 133 people died nationwide, while more than 55,000 were treated for heat exhaustion between July and August. 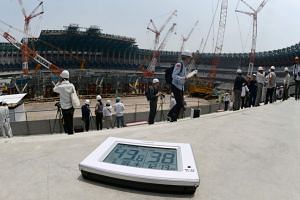 Sunday's heat wave left two people dead while at least 575 others, according to a Kyodo News tally, were taken to hospital due to heatstroke symptoms.

A 65-year-old man died after collapsing on the street in Miyagi prefecture, north-east Japan, as did a 36-year-old amateur golfer who was competing in a tournament in Hokkaido's Shimizu town.

A 24-year-old man is in serious condition after collapsing while running a marathon in Aomori prefecture, north-east Japan.

The weather agency has issued heat advisories urging preventive measures against heatstroke, such as by drinking water frequently and wearing hats or caps, or using a parasol.