TOKYO (AFP) - Hello Kitty has already found its way onto bus and aircraft services - and is now set to make its debut on Japan's iconic bullet train.

In collaboration with Hello Kitty creator Sanrio, the exterior of the bullet train will be decorated with images of the character and its trademark red ribbon, said the rail company, known as JR West. 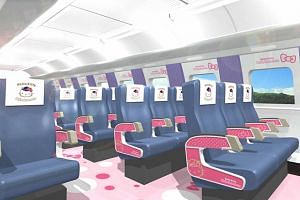 The interior of one train car will have full Hello Kitty decorations, the company said, adding: "It will be decorated snappily and adorably."

Another car will have no passenger seats but instead feature sales of regional specialities, including a selection of goods and foods, in a bid to boost the local economy and tourism.

Sanrio has already collaborated with a sightseeing bus operator and an airplane company to launch a double-decker "Hello Kitty bus" and a "Hello Kitty jet."

Hello Kitty, Japan's global icon of cute, was introduced in 1974 and is now one of the country's most famous exports - adorning everything from pencil cases to pyjamas.