Ports, oil refineries and industrial plants in the area have been shut. Power to some areas were also reduced as a precaution.

The storm has fuelled concern about sugar production in Guangdong, which accounts for a tenth of national output, at about one million tonnes. China sugar futures rose last week on fears for the cane crop.

Guangdong is also China's most populous province, with a population of more than 100 million.

The airport in the boomtown of Shenzhen has been shut since midnight, and will be closed until 8am on Monday. Flights have been cancelled in Guangzhou and the neighbouring island province of Hainan.

Guangzhou Baiyun International Airport, one of the major aviation hubs in China, has cancelled all flights from 12pm on Sunday to 8am on Monday, affecting thousands of passengers.

Meanwhile, Guangdong provincial department of education has suspended all classes in schools and kindergartens on Monday.

The raging storms and heavy rainfall have left many streets in Guangdong's coastal cities flooded, with trees and billboards blown away. 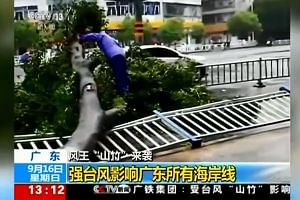 The Guangdong provincial government has urged departments and cities in the coastal areas to take every measure to reduce casualties and minimise economic losses.

High winds and swells have also hit Fujian province north of Guangdong, causing ports to be shut, ferry services to be suspended, and more than 100 flights to be cancelled. Waves as high as 7.3m were sighted in the Taiwan Strait.

Heavy flooding and damaged buildings were reported across Guangdong, Hong Kong and Macau on Sunday, as Typhoon Mangkhut swepts past the Pearl River Delta, bringing fierce winds and intense rain.

Smashed windows, uprooted trees, swaying buildings, collapsing external walls, and flooded lobbies in residential estates, along with rough waves crashing against the breakwater, were seen from images and videos posted on social media across cities in the river delta.

In Hong Kong, by 2pm, a total of 111 people - 60 men and 51 women - had sought medical treatment at public hospitals during the typhoon. There were 76 reported cases of fallen trees, the Hong Kong Special Administrative Region (SAR) government said.

As a heavy rainstorm affects the city, with more than 100mm of rainfall recorded in the past few hours, the Hong Kong Observatory announced flooding in the northern New Territories at 11.25am. The Drainage Service Department received five confirmed flooding cases by early Sunday afternoon.

Meanwhile, the weather authority also issued a landslide warning at 2.20pm. It said that Hurricane Signal No. 10, the SAR's highest typhoon signal, will remain in force in the afternoon.

Mangkhut’s north-westerly track will bring heavy rain and winds to the autonomous region of Guangxi early on Monday, before it weakens into a tropical depression to reach south-western Yunnan the next day.